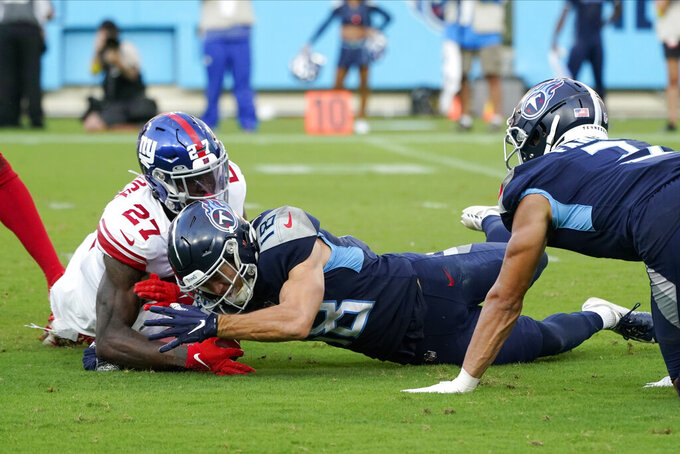 Tennessee Titans' Kyle Philips (18) fumbles a punt as the New York Giants' Jason Pinnock (27) recovers the ball during the second half of an NFL football game Sunday, Sept. 11, 2022, in Nashville. (AP Photo/Mark Humphrey)

NASHVILLE, Tenn. (AP) — Tennessee's best wide receiver the past three seasons now plays in Philadelphia, and the Titans turned to a group approach to help replace A.J. Brown at least in their season opener.

Tennessee's rookies caught 10 passes for an NFL -high 132 yards in the Titans' opening loss to the New York Giants — half of the passes Ryan Tannehill completed and nearly half of the quarterback's 266 yards passing.

Titans coach Mike Vrabel said Thursday that he just thinks they need production from everybody, especially as they prepare to visit Buffalo (1-0) on Monday night.

“That's the key,” Vrabel said. “It doesn’t have to do anything with age or experience. It’s just making sure that we’re all focused on the details, that everybody’s working to get open, whether it’s man or zone, being where they’re supposed to be. And again, the quarterback has to make great decisions.”

Making the Titans' season-opening loss a bit more painful is the strong debut Brown had in Philadelphia, tying a career-high with 155 yards receiving. That was second most across the NFL over the opening weekend.

Tennessee drafted Treylon Burks with the 18th pick acquired from Philadelphia in the trade for Brown, and Burks had three catches for 55 yards. Kyle Philips, a fifth-round pick out of UCLA, led with nine targets and six catches for 66 yards.

The Titans' rookies tied the Jets' newcomers for most receptions in the opening weekend, though Tennessee had six of those 10 go for first downs — an NFL high. Tennessee's rookies also led the NFL with 132 yards.

Tennessee also led the NFL with Tannehill completing seven passes of 20 yards or longer to four different receivers. Burks had catches for 20 and 27 yards, running back Dontrell Hilliard for 31 and 23 yards, Philips at 20 and 21 yards and Cody Hollister at 22 yards.

Tennessee traded for Woods, a veteran who started against the Giants despite tearing his left ACL on Nov. 12. Woods ranks 13th among active NFL receivers with 7,090 yards receiving.

Vrabel said they don't necessarily look at needing to get a particular player going each game.

“We’re going to obviously have some things that are for guys, but we just have to make sure that everybody’s in the right spot and the quarterback makes a decision,” Vrabel said.

Tannehill was 4 of 5 for 38 yards to put the Titans in position to beat the Giants with a field goal that missed left.

Defensive holds wiped out a couple of his incompletions, and he also spiked the ball to set up the field goal. But Tannehill threw five passes to rookies — four to Philips.

Hooper, a two-time Pro Bowl tight end at the end of his time in Atlanta, caught one of two passes thrown to him with both on that last drive.

Tannehill said Hooper will be a playmaker for the Titans throughout the season and there weren't a lot of opportunities for the tight end in the opener.

Tannehill said he has a ton of confidence in Hooper and Woods and all of the receivers.

“It’s going to vary week to week, but we have a lot of confidence in our guys and know we’re able to spread the ball around and try to find whoever’s open,” Tannehill said.

NOTES: Philips, Hilliard, and CB Kristian Fulton were among those not practicing during the open portion of practice Thursday. ... The Titans signed OLB Gerri Green to the practice squad Thursday, replacing rookie OLB David Anenih, who signed with Pittsburgh. Green was a sixth-round pick by Indianapolis in 2019 out of Mississippi State and has been on practice squads with the Colts, Patriots, Washington and Las Vegas.