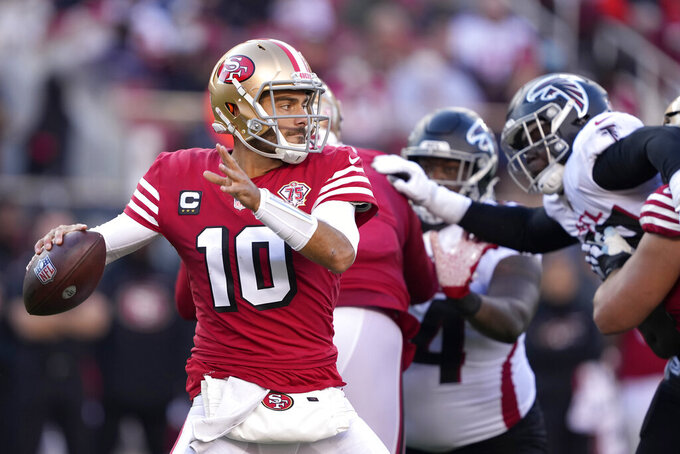 BETTING LINE: 49ers by 3 1/2, according to FanDuel SportsBook.

TURNOVER DIFFERENTIAL: 49ers minus-2; Titans minus-7.

49ERS PLAYER TO WATCH: RB Jeff Wilson Jr. has had a late-season resurgence after a freak knee injury in the offseason sidelined him for the first half of the schedule. Wilson took some time to find his rhythm but is again running like the player who led San Francisco in rushing last season. He had 56 yards two weeks ago against the Bengals and then ran 21 times for 110 yards and a TD last week against the Falcons for his third career 100-yard game.

TITANS PLAYER TO WATCH: QB Ryan Tannehill is the only NFL quarterback with seven or more rushing TDs in each of the past two seasons. He has four TD passes with no interceptions and a 101 rating in two career starts against the Niners.

KEY MATCHUP: The Titans' defense against the Niners' rushing game. Tennessee has allowed a total of 43 yards rushing combined over the past two games. San Francisco ranks fourth in the NFL averaging 142.3 yards per game.

SERIES NOTES: The 49ers have won two straight and four of the past six. This will be the 49ers' first game in Nashville since 2013 and third overall. Titans coach Mike Vrabel, in his fourth season, will be coaching against the only NFL team he has yet to face as a head coach.

STATS AND STUFF: The Niners have won five of six games. ... San Francisco is 5-2 on the road this season. ... The Titans have a one-game lead over Indianapolis in the AFC South and need any combination of Titans wins and/or Colts losses to clinch a second straight division title. This is the first of two straight home games for the Titans. ... Niners QB Jimmy Garoppolo topped the 3,000-yard passing mark in a season for the second time in his career last week and is the second-highest-rated passer in the NFL over the past eight weeks (107.4). ... San Francisco WR Deebo Samuel has rushed for seven TDs on the season, including at least one in five straight games. He’s the first receiver in the Super Bowl era to do that and the third 49ers player since the merger to have a TD run in at least five straight games. ... 49ers TE George Kittle’s 4,429 yards receiving are the third most through five seasons for any tight end in NFL history, trailing only Jimmy Graham (4,752) and Kellen Winslow Sr. (4,513). ... DE Nick Bosa has 15 sacks on the season, including at least one in six straight games. That’s the longest streak for the Niners since Aldon Smith did it seven games in a row in 2012 when he set the franchise record with 19 ½ sacks. ... 49ers DE Arden Key has at least a half-sack in six of his last seven games. ... San Francisco LB Fred Warner has a career-high three fumble recoveries on the season and the Niners lead the NFL with 20. ... The Titans are 12-4 against NFC teams since Vrabel was hired. ... The Titans have allowed only one 100-yard rusher this season. ... Three Titans have at least seven sacks: Harold Landry III (11), Jeffery Simmons (7 1/2) and Denico Autry (seven). Cincinnati is the only other team in the NFL with three players with seven sacks or more apiece. ... The Titans have played a league-high 87 players this season, highest in a non-strike year in NFL history. ... Five players who weren't on the Tennessee roster at the start of the season have started at least one of the past two games. Only six Titans have started the first 14 games. ... Titans S Kevin Byard has 23 interceptions since 2017, third in the NFL in that span behind Xavien Howard (26) and J.C. Jackson (24).

FANTASY TIP: Titans WR A.J. Brown. Tannehill has not thrown for more than 191 yards in the three games Brown has been on injured reserve. The third-year receiver is eligible to be activated off IR before this game, and Brown's return would give the Titans much-needed help in the passing game.