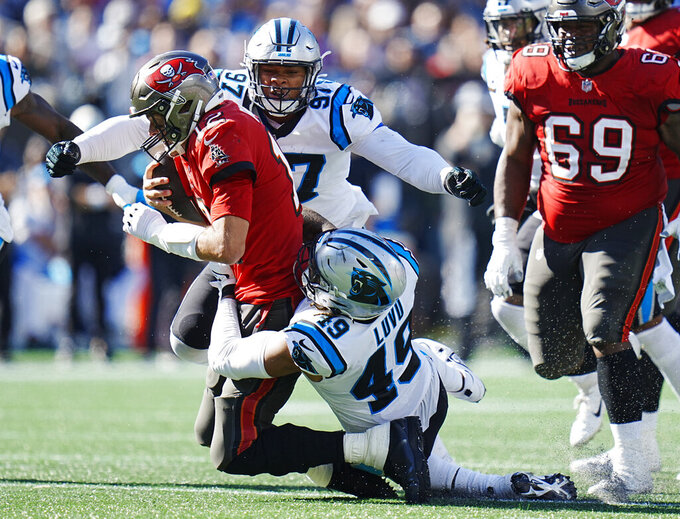 Tom Brady threw a perfect deep ball to a wide-open Mike Evans on the third play of the game that would’ve been a 64-yard touchdown pass if the star receiver hadn’t dropped it.

No problem? Not this year.

Evans’ miscue set the tone for Tampa Bay’s 21-3 loss to the woeful Carolina Panthers on Sunday.

“No one player is the sole reason you lose, but that was definitely the biggest reason,” Evans said. “I’d seen the life go out of us and it took me a while to get back playing. We were taught just to play the next play, but it was tough. Wide open, one of the best in the game, I’ve got to catch that. I’ve got to get that. It’s what I wanted, a wide-open look.”

When rookie receiver Romeo Doubs dropped a low pass that would’ve extended a drive for Green Bay, Rodgers was visibly frustrated and cursed on his way to the sideline. The Packers only trailed by a field goal and there was plenty of time to rally. Instead, inferior Washington held on for a 23-21 victory.

Dropped passes are part of football. Brady and Rodgers have overcome many mistakes, including plenty of their own, on their way to winning 434 games combined in the regular season and playoffs.

But the superstar quarterbacks haven’t found their magic touch in 2022.

Both are off to 3-4 starts. Their combined 6-8 record is the worst for the duo since Rodgers became a starting QB in 2008.

The main issue for Brady and Rodgers is lack of help from teammates and coaches.

Injuries have depleted Tampa Bay's offensive line, the Buccaneers have the worst rushing offense in the league and tight end Rob Gronkowski isn’t around to help Brady when he needs him most.

Predictable playcalling from offensive coordinator Byron Leftwich also has been troubling. Carolina’s defense seemed to know what was coming quite often.

Brady has a losing record through seven games for the first time since 2002, which was his first full season as a starter and the year after he led New England to the first of his seven Super Bowl titles.

Critics are questioning the 45-year-old Brady’s commitment because he took 11 days off during training camp and missed a walkthrough practice ahead of last week’s loss to Pittsburgh after going to Robert Kraft’s wedding.

Brady misfired on some of his passes against the Panthers and wasn’t in sync with his receivers. Still, the team’s struggles aren’t his fault.

“I think executing in practice and doing well builds confidence,” Brady said. “Then ultimately when you’re out in the game, you got to make difficult decisions under pressure. We’re plenty capable of making plays. We’re just not making them consistently enough to score points.

The Packers have been plagued by injuries and inconsistency on the offensive line. They also haven’t been able to replace All-Pro wide receiver Davante Adams.

“Outside of (wide receivers Sammy Watkins and Allen Lazard), there’s too many mental mistakes,” the 38-year-old Rodgers said. “I talked about simplification last week. I don’t really know where to go when it comes to that. It has to be something inside, but it has the accountability for our performance.

"We’re just having way too many detailed mistakes. It’s just not winning football. It could be the total wrong route. It could be the wrong stem, it could be the release. We’re just not good enough to overcome some of those things right now. We have talent on our team for sure, but it has to consistently show up.”

It's clear Brady and Rodgers can’t just show up and win alone.