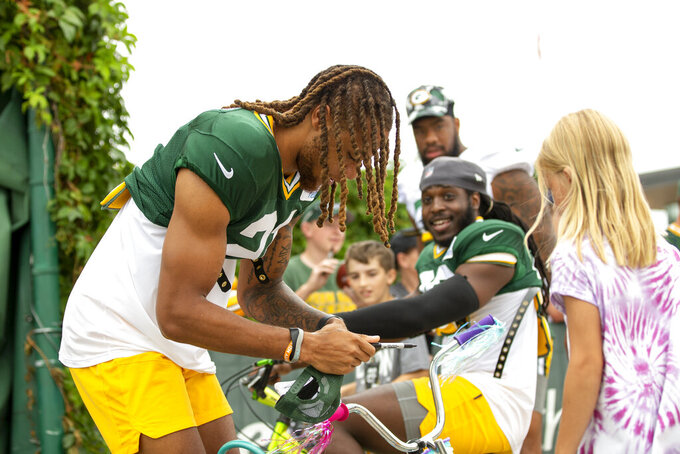 GREEN BAY, Wis. (AP) — More than a decade has passed since the Green Bay Packers had a defense that could be described as elite.

This could be the year that changes.

Reigning MVP quarterback Aaron Rodgers predicted at the start of training camp that the offense could take its lumps early as it faces a defense that didn’t allow a single touchdown in a 13-10 NFC divisional playoff loss to the San Francisco 49ers. That’s pretty much been the case, raising hopes the defense can build off its postseason performance.

Green Bay has since brought in a pair of first-round picks to its defense with the additions of former Georgia teammates Quay Walker at linebacker and tackle Devonte Wyatt. They also managed to keep 2021 All-Pro linebacker De’Vondre Campbell and cornerback Rasul Douglas from leaving via free agency.

Veteran safety Adrian Amos, entering his fourth season with the Packers, was asked if this is the most talented defense he’s played on since arriving at Green Bay.

“It might be the most talented defense that I’ve been on, period,” said Amos, who was part of the 2018 Chicago Bears team that led the NFL in scoring defense. “But like I said, you can only say that at the end of the year. How are we going to finish? How are we going to play each and every week? What’s the tape going to show?”

But this defense still must prove it’s capable of containing the run consistently. It also must avoid wearing down the way it did toward the end of the 2021 regular season.

Before that playoff effort against the 49ers, the Packers allowed at least 28 points in five of their last seven regular-season games. One of the two exceptions was a 37-10 rout of the Minnesota Vikings, who didn’t have starting quarterback Kirk Cousins available. The Packers were ranked as high as third in total defense before that late slide.

And although the Packers ranked 11th in yards rushing allowed per game, that figure is skewed by the fact they faced the fourth-fewest carries of any team. Green Bay allowed 4.7 yards per rush to rank 30th out of 32 NFL teams, ahead of only Kansas City and Pittsburgh.

Packers coach Matt LaFleur has mentioned throughout training camp the need for more consistency from its run defense. The Packers are hoping the addition of free-agent defensive lineman Jarran Reed and Wyatt plus the maturation of 2021 fifth-round pick T.J. Slaton should provide more help up front for two-time Pro Bowl selection Kenny Clark and Dean Lowry.

“Just on paper, this is the most talent we’ve had on defense,” said Lowry, who is beginning his seventh season in Green Bay. “But we’ve got to earn it each day. It’s never given to us. But right now, it’s looking like this could be the best defense we’ve been a part of.”