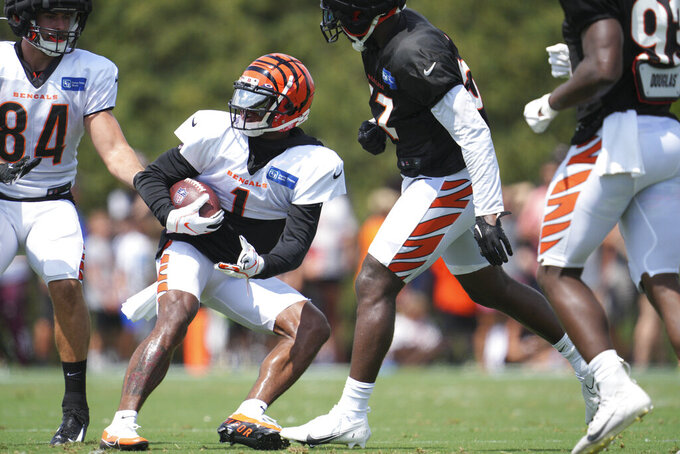 CINCINNATI (AP) — Kenny Pickett — the former Pitt star, Heisman Trophy finalist and first-round draft pick — might be the quarterback of the future for the Pittsburgh Steelers. But for right now, Mitch Trubisky is their man under center.

Trubisky will be the starter when the Steelers open the post-Big Ben era on Sunday against the AFC champion Cincinnati Bengals.

Trubisky, who signed a two-year, $14 million contract with the Steelers in March, got the nod after battling Pickett and three-year backup Mason Rudolph throughout training camp. It will be a fresh start for the 28-year-old after failing live up to expectations with the Chicago Bears and then going through last season backing up Josh Allen in Buffalo.

“I had a really good camp. I came in here with a lot of experience, showed I could lead a team, showed I’ve been playing really well and throwing the football really well,” said Trubisky, the No. 2 overall pick in 2017. “Now we go out there and execute on the field.”

His Steelers teammates apparently believe in him, too, installing him as one of five team captains earlier this week.

The Steelers are going to have to worry a little bit about their defense against quarterback Joe Burrow and the Bengals, who have won the last three games in the series — including a sweep last season as Steelers quarterback Ben Roethlisberger played out his final year.

Burrow, who had to recover from an appendectomy at the start of camp after taking the Bengals on an improbable run to the Super Bowl last season, will operate in front of an improved offensive line with four new starters. In the backfield, Burrow will be joined by running back Joe Mixon, who has been a steady, productive presence the past few years despite the lackluster line play.

Bengals coach Zac Taylor is deferential when describing the trust and respect his third-year quarterback has earned.

“It helps you sleep better at night when you have Joe Burrow playing quarterback for you, I can promise you that,” he said.

The Bengals acted quickly in the offseason to shore up an offensive line that allowed 51 sacks last year, plus another 19 in the postseason.

Trubisky is the first quarterback other than Roethlisberger to start a season opener for the Steelers since Charlie Batch filled in to start the 2010 season while Roethlisberger served a four-game suspension for violating the league’s personal conduct policy.

Roethlisberger retired at the end of last season, which was his 18th in the NFL.

Ja'Marr Chase's 1,455 yards receiving broke a Bengals record and got him selected the AP Offensive Rookie of the Year.

Tee Higgins, who finished last season with 1,091 yards, has recovered from shoulder surgery he had after the Super Bowl.

Veteran Tyler Boyd (828 yards) rounds out the trio of starters. Higgins and Boyd could benefit from the Steelers trying to keep track of Chase.

Steelers linebacker T.J. Watt tied an NFL record with 22 1/2 sacks last season on his way to winning the Defensive Player of the Year award, but did little against the Bengals.

He sat out a 24-14 loss in September with an injury and failed to get to Burrow during a blowout defeat at Paul Brown Stadium last November.

Watt anchors a defense that underwent a bit of an overhaul both on and off the field during the offseason. Teryl Austin was promoted to defensive coordinator following Keith Butler’s retirement, and Tomlin hired former Miami Dolphins head coach Brian Flores as a senior defensive assistant.

The Steelers also signed inside linebacker Myles Jack and defensive tackle Larry Ogunjobi in an effort to shore up a defense that finished dead last against the run last season.