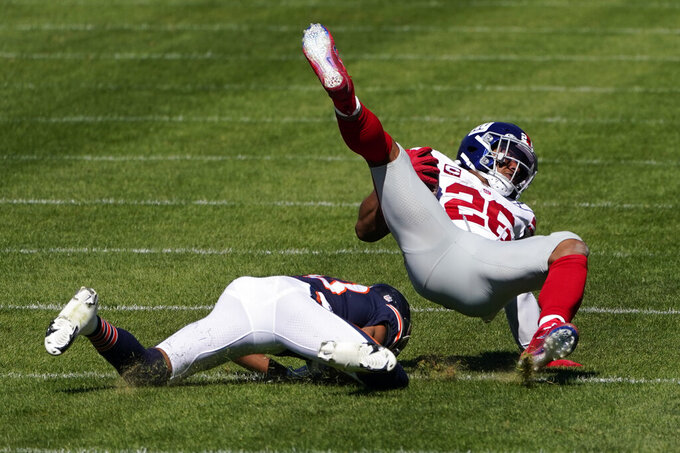 New York Giants running back Saquon Barkley (26) is brought down by Chicago Bears cornerback Kyle Fuller (23) during the first half of an NFL football game in Chicago, Sunday, Sept. 20, 2020. (AP Photo/Charles Rex Arbogast)

CHICAGO (AP) — The Chicago Bears were happy with another close win, while the New York Giants have greater concerns than their 0-2 record: a potentially serious injury to star running back Saquon Barkley.

Mitchell Trubisky threw two touchdown passes and the Bears hung on to beat the Giants 17-13 on Sunday.

The Bears (2-0) chewed up New York early on, grabbing a 17-0 halftime lead, and withstood a big push a week after rallying from 17 down at Detroit for their first season-opening win in seven years.

“Like, 2-0 is not a bad situation,” defensive tackle Akiem Hicks said. “I don’t care how you get it. Two-and-oh is delicious. I’ll eat that every day of the week.”

The Giants (0-2) refused to go quietly even though they lost Barkley to a right knee injury on the opening play of the second quarter.

New York’s Dion Lewis made it a seven-point game when he plowed in from the 1 in the opening minute of the fourth.

James Bradberry then intercepted Trubisky when he ripped the ball out of Allen Robinson’s hands, leading to a 37-yard field goal by Graham Gano that cut it to 17-13 with 7:43 remaining.

The Bears caught a break on fourth down at the New York 36 with just under four minutes left. New York’s Blake Martinez deflected a pass intended for Jimmy Graham, and the ball ricocheted to tackle Bobby Massie for a first down. Cairo Santos missed wide left on a 50-yard field goal attempt, giving New York the ball on the 40 with 2:02 remaining.

The Giants drove to the 10 before Golden Tate got called for pushing off against Eddie Jackson near the goal line on an incomplete pass as time expired.

“We did a good job overall as far as moving the ball systematically down the field," Giants coach Joe Judge said. “Look, we’re standing at the 10-yard line with one play to go. That’s really what you’re working for in the 2-minute drill. Just give yourself an opportunity.”

The Bears were glad to hang on after it looked like they were headed toward an easy win. They're off to their best start since the 2013 team won the first three games.

“The way it went with scoring no points in the second half, it certainly doesn’t feel as exciting as it was last week when we won with a comeback and scoring all our points in the fourth quarter,” coach Matt Nagy said. “But I also told our guys, now listen, it is not easy to win in this league. I don’t care who you’re playing and we’re 2-0."

Trubisky completed 18 of 28 passes for 190 yards. He threw two interceptions and was sacked four times.

He hit David Montgomery for a 28-yard touchdown on the game’s opening possession and added a 15-yarder to Darnell Mooney in the closing seconds of the first half to give the Bears a 17-0 lead.

Montgomery ran for 82 yards. Robert Quinn had a strip sack in the first quarter that led to a field goal in his Bears debut after missing the opener with an ankle injury. Khalil Mack had his first sack of the season and recovered a fumble. And Chicago held New York to 295 yards after giving up 426 last week.

Limited to 6 yards on 15 attempts against Pittsburgh on Monday night, Barkley came up clutching his right knee when he was dragged down by Jackson at the end of a run. The 2018 offensive rookie of the year was taken for X-rays after being helped to the sideline and will be examined further on Monday.

Second-year QB Daniel Jones threw for 241 yards and an interception.

"Tough, tough first half for us,” Jones said. “You know, I’d like to go back and look at the turnovers. Certainly got to do a better job with that. We came out in the second half and we responded as a team. I thought we were able to play some complementary football with the defense coming up for us, making big plays and the offense, you know, able to move the ball and score some points. So, you know, ultimately, we ran out of time there at the end, but we responded and we certainly got to start better.”

The Bears announced a three-year contract extension with running back and return specialist Tarik Cohen on Sunday. The deal guarantees about $9.5 million and could be worth $18.25 million, agent Drew Rosenhaus said.

Giants: WR Sterling Shepard left with a toe injury. “It looked like the defensive back landed on his foot at the end of the first half,” Judge said.

Bears: Montgomery hurt his neck early in the second quarter when he went airborne over Austin Johnson on a short run and landed head-first. He returned in the second half.