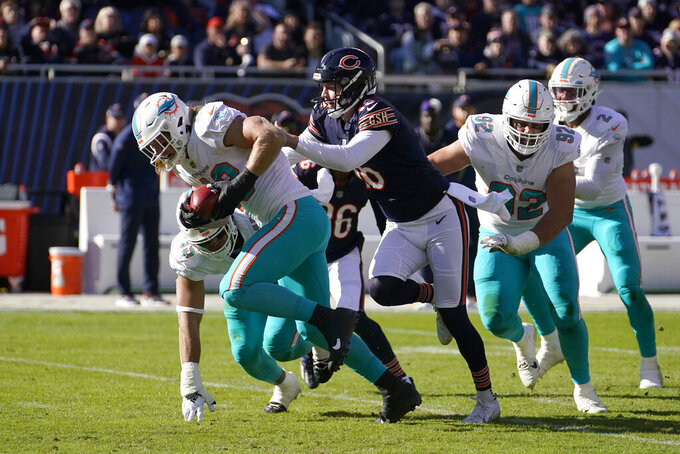 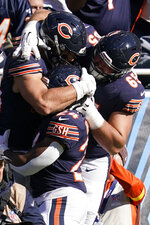 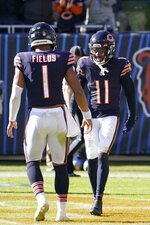 CHICAGO (AP) — Tua Tagovailoa held two thumbs up as he walked off the field following another big performance that helped propel the Dolphins to a win.

The way Justin Fields was running for Chicago, Miami sure needed it.

Tagovailoa threw for three touchdowns, Tyreek Hill had 143 yards receiving and Miami overcame a record-setting rushing effort by Fields to beat the Bears 35-32 on Sunday.

In a game where neither team did much to stop the other, the Dolphins (6-3) had no trouble moving the ball against a gutted defense and made enough plays to come away with their third straight win.

Fields ran for 178 yards, the most by an NFL quarterback in a regular-season game. Michael Vick had the previous high with 173 for Atlanta in a win at Minnesota in 2002. Colin Kaepernick ran for 181 yards for San Francisco in a playoff victory over Green Bay during the 2012 season.

Fields scrambled for a 61-yard touchdown — the longest run by a Bears quarterback — and threw for three scores. He also became the first player since at least 1950 with at least 150 yards rushing and three TD passes in a game.

“You just see what type of player he is,” Bears safety Eddie Jackson said. “You just continue to see him grow week-in, week-out. And the offense as a whole, continuing to come out here and get us 30 points. That’s something that we’ve been asking for and we can’t continue to let teams come out and score 28 or 35 points on us as a defense.”

Fields' performance ensured the Bears (3-6) had a chance late. They got the ball on their 28 after Miami punted with just under three minutes remaining. But on fourth-and-10 at the 42, Fields threw incomplete to Equanimeous St. Brown, sealing Chicago's fifth loss in six games.

Tagovailoa, the NFL’s top-rated passer, had all the time he needed to throw after the Bears traded pass rusher Robert Quinn and star linebacker Roquan Smith in the past two weeks.

“The growth has been unbelievable in how he's playing the position, learning the whole system and then how he's handling the ebbs and flows of natural, in-game momentum,” coach Mike McDaniel said. “Saw it again today.”

Hill, the NFL’s leading receiver, caught seven passes, including a 3-yard touchdown in the second quarter.

Jaylen Waddle, fourth in the league in yards receiving coming in, added 85 yards and a touchdown.

Jeff Wilson Jr. had a TD catch in his first game since a trade-deadline deal from San Francisco. Jaelan Phillips blocked a punt, and Andrew Van Ginkel returned it 25 yards for a score.

The Bears have scored 94 points the past three weeks. They came in leading the NFL in rushing, and with 252 yards on the ground, they joined the 1976 Steelers as the only teams in the Super Bowl era to run for at least 225 in four straight games.

Fields completed 17 of 28 passes for 123 yards, with two touchdowns to Cole Kmet and one to Darnell Mooney.

“It was a matter of time before was having games like this,” Kmet said. “We’ll continue to progress not only in the running game but in the passing game as time goes on.”

The Dolphins needed just four plays to go 75 yards on the opening drive of the second half, with Tagovailoa finding Waddle in the end zone for an 18-yard TD that extended their lead to 28-17.

Fields then scrambled 61 yards to the end zone, the longest run of his career. Trevon Wesco caught the 2-point conversion, pulling Chicago within three.

But the Dolphins answered, with Tagovailoa hitting Wilson for a 10-yard score that bumped the lead to 35-25.

Fields made it a three-point game early in the fourth with a 4-yard touchdown pass to Kmet. The Dolphins — aided by Jackson’s pass interference on a deep ball to Waddle — drove to the Chicago 14, only to come away empty-handed when Tagovailoa underthrew Durham Smythe on a short pass.

Bears: CB Kindle Vildor (ankle) was hurt in the first quarter trying to guard Hill on a throw to the end zone that resulted in a pass-interference penalty that set up a touchdown.