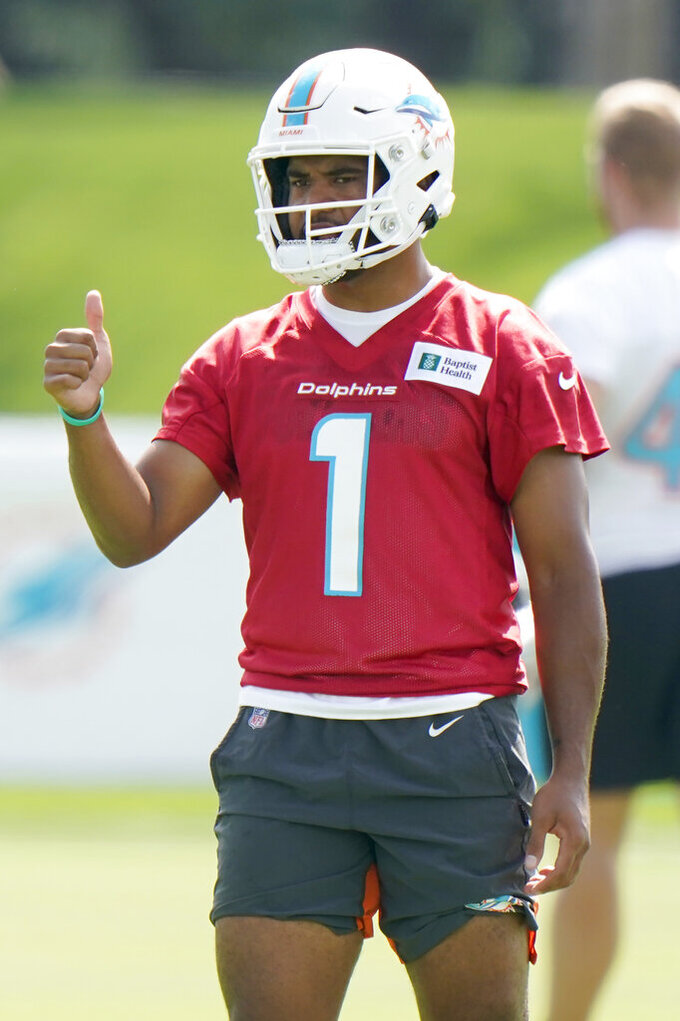 MIAMI GARDENS, Fla. (AP) — Tua Tagovailoa brought the offense to the line of scrimmage, and after he took the snap and cocked his arm, he had a choice of five wide-open receivers.

The defense was on an adjacent field.

It will get harder going forward for Tagovailoa as he begins his second NFL training camp in a much more commanding role with the Miami Dolphins, and with even more pressure than he had as a top-five draft pick last year.

Tagovailoa's place on the depth chart matches his uniform — No. 1 — and this season will help determine whether he can become a franchise quarterback.

“He’s super prepared mentally and physically,” tight end Mike Gesicki said after the first practice Wednesday. “Last year he was building on that. Now he feels comfortable, and it’s his show.”

A year ago, Tagovailoa was coming off a hip injury that ended his Alabama career and competing with veteran Ryan Fitzpatrick for the starting job. Fitzpatrick won that camp battle, but Tagovailoa took over at midseason.

Fitzpatrick is now with Washington, and newcomer Jacoby Brissett is the veteran backup.

With the starting job won, Tagovailoa's voice is now more assertive. Teammates say so, and he doesn't dispute it.

“It’s not always what they want to hear, but what they need to hear,” he said. “After practice today, I got everyone together and talked to the entire offense about our evaluation of the day.”

That evaluation: Some good, some bad. When the offense and defense were on the same field, Tagovailoa was intercepted twice. He also displayed good mobility and completed a deep throw — an issue last season — to Albert Wilson.

It was Tua's show.

“He’s definitely a leader,” Wilson said. “He knows what the coaches want from him; we know what he wants for us.”

Tagolvailoa said he feels “really good” physically and excited about the offense, which includes a receiving corps upgraded by the additions of Will Fuller and top draft pick Jaylen Waddle.

“It’s just getting everything down with the guys, finding where guys are going to be, knowing how guys run certain routes," Tagovailoa said. “Really, that’s what we’re trying to find out.”

One of the big questions in camp will be how well Tagovailoa clicks with the speedy Waddle. They were teammates at Alabama.

“I’ve talked to him a lot about our chemistry and what I expect from him,” Tagovailoa said. “It’s just things we’ve got to work through.”

Tagovailoa is also adjusting to the new offensive co-coordinators — Eric Studesville and George Godsey. They'll share play-calling duties, and the voices of both were in Tagovailoa's headset during practice.

So it was back to work after a brief summer vacation. During the break Tagovailoa took up golf, which he described as fun but frustrating.

The best part of his game?

The Dolphins hope he has more staying power as a quarterback.

I’m not a good golfer but I love it. It’s fun but it gets frustrating. (best part of his game?) Maybe the first four holes.