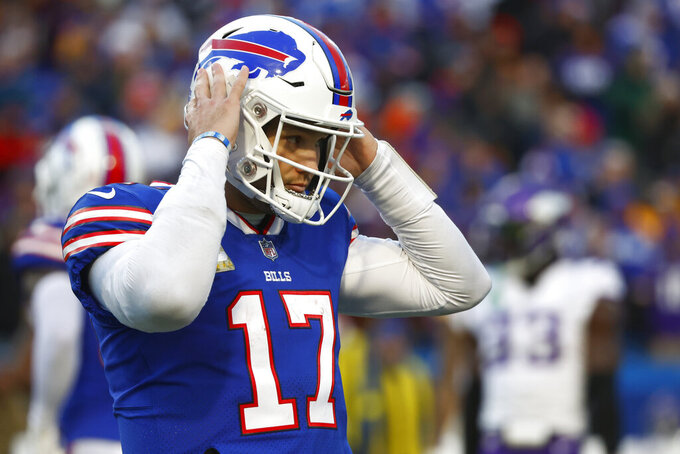 ORCHARD PARK, N.Y. (AP) — Josh Allen lay face down on the field and kicked his feet on the turf.

No, the Buffalo Bills quarterback did not aggravate an injury to his throwing elbow while sliding to tackle Minnesota’s Patrick Peterson. He was, instead, reacting out of frustration for throwing an interception.

And that was just the start. Allen's day only got worse, committing two more turnovers — a muffed snap and an interception — as Buffalo blew a 17-point second-half lead in a 33-30 overtime loss to the Minnesota Vikings on Sunday.

“Horrendous second half. I gotta be better,” Allen said.

It’s become a familiar lament from a fifth-year starter, whose ball-control issues have become a season-long concern, and for an offense having difficulty scoring points in the second half.

Add it up, and the Bills (6-3) have lost two straight and surrendered their lead atop the AFC standings.

“No explanation as of now. We got to execute better. That’s on my shoulders," said Allen, saying the injury to his right elbow, which led to him missing two of three practices this week after getting hurt against the Jets last week, had nothing to do with the turnovers.

His first interception opened the door for the Vikings' comeback, setting up C.J. Ham’s 3-yard run that cut Buffalo’s lead to 27-23.

His second turnover led to the Vikings taking the lead. One play after Buffalo’s defense appeared to secure the win by stopping Kirk Cousins for no gain on fourth-and-goal from the half-yard-line, Allen never gripped the snap from Mitch Morse and lost the ball. It was recovered by linebacker Eric Kendricks diving into the pile for a touchdown.

Just when Allen put the Bills in position to at least come away with an overtime tie, the quarterback misfired once more. Facing second-and-10 at the Vikings 20, Allen forced a pass over the middle intended for Gabe Davis in the end zone, only to watch Peterson jump in front and pick it off.

Allen has turned the ball over at least once in eight of nine games. His 10 interceptions are two more than he had all of last season, and his three lost fumbles already matched last year’s total.

“I believe in him. That’s really where it starts,” coach Sean McDermott said, when asked his message to Allen.

“He’s the leader of our football team. Better days ahead,” he added. “This is life in the NFL, unfortunately, and it’s going to be a hard one to go bed tonight.”

Allen’s record dropped to 25-20 when he turns the ball over, and 7-13 when he does so after halftime.

Allen has thrown two interceptions after halftime in each of his past three games, which coincide with Buffalo’s struggles to score points.

In winning five of their first six, the Bills out-scored their opponents by a combined margin of 84-17 after halftime. In its past three outings, Buffalo has been outscored 53-12 and limited to four field goals.

Buffalo’s red-zone offense in particular is sputtering. In its past five outings, the Bills have turned the ball over six times (including once on downs) and scored just nine touchdowns on 20 trips inside an opponent’s 20.

“If I know Josh, I know he’s extremely hard on himself,” Diggs said.

“He’s going to hate it for 24 hours, but I’ve got his back. I’ll take the good with the bad any day. My quarterback is a winner,” he added. “We can be better. We will be better.”