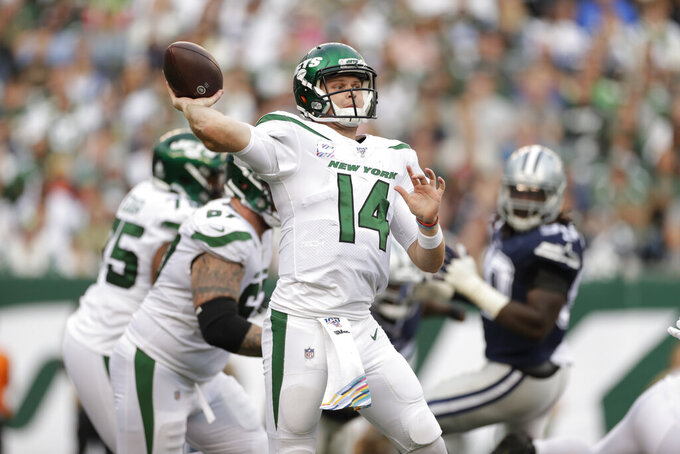 EAST RUTHERFORD, N.J. (AP) — Tom Brady and the New England Patriots are still rolling right along with a high-powered offense and a stingy defense that has their record blemish-free.

The New York Jets look a bit different, though, from the team Bill Belichick's bunch beat 30-14 less than a month ago. And, it all starts at quarterback.

Luke Falk was under center then, making his first NFL start and looking overwhelmed and overmatched. Sam Darnold is back this time around, fully recovered from mononucleosis and coming off one of the best performances of his young career.

"He's a big, strong kid that can stand in the pocket and he's hard to tackle," Belichick said. "He's not an easy guy to bring down. He's big, he can see and find guys under pressure."

Darnold showed no signs of rust after missing three games because of his illness, going 23 of 32 for 338 yards and two TDs with an INT in a 24-22 win over Dallas and being selected the AFC's offensive player of the week.

"Well, the quarterback makes a big difference," Belichick said. "They've gotten other players back on both sides of the ball. Coach Gase had the bye week and probably had an opportunity to get some things reworked. That was obvious in the Dallas game that their execution and some of the things they were doing they were just more efficient at and looked better doing them."

It was a big boost for what had been a badly struggling Jets offense. Darnold's day was highlighted by his 92-yard touchdown throw to Robby Anderson, the longest offensive play in the NFL this season and the second-longest in franchise history.

Now, Darnold and the Jets hope to use that momentum to get something going against the Patriots' top-ranked defense at MetLife Stadium in a prime-time showdown. New York is also expecting linebacker C.J. Mosley, sidelined since injuring his groin in the season opener, to return Monday night.

"You've got to continue to grind," Darnold said. "We know that after a good win, you've got to come right back in here because we got a tough one Monday night against the Pats. We know what our job is, we've just got to come in and get back to work."

The Patriots are off to a 6-0 start for the fourth time in team history, with a chance to get to 7-0 for just the third time. They also have a chance to sweep the two-game regular-season series against the Jets for the fourth straight year.

Brady is 28-6 against the Jets in the regular season, including seven straight wins. He's also 16-7 in Monday night games, including 2-0 against New York. Meanwhile, Belichick is 18-8 on Monday nights — but just 9-7 in those games on the road.

"Monday night is always a high-energy game," Belichick said. "We'll point to that and know it's always tough down there in New York. So, we need to have a good week here and be ready to go."

Here are some other things to know for the latest Patriots-Jets showdown:

The Jets and Patriots play on a Monday night for the eighth time, and New York leads those matchups 4-3.

The previous time the AFC East rivals squared off on "Monday Night Football" was in 2010, when New England cruised to a 45-3 victory.

It's also the first time the Patriots are playing a Monday night game on the road against the Jets since 2005, when they won 31-21.

The Patriots entered Week 7 allowing a league-low eight points per game. One of the reasons is how stingy their defense has been on third down.

New England has held teams to an NFL-low 10 of 73 (13.7 percent) conversion rate in those situations. The fewest third downs allowed in a 16-game season is 49 by the 1991 New Orleans Saints.

Le'Veon Bell hasn't had a breakout-type game for the Jets, but the fluid quarterback situation certainly hasn't helped.

With Darnold back and the offensive line improving the past few weeks, the star running back could start seeing some more opportunities to make plays. He has 256 yards rushing and a TD on 85 carries for a 3.0 average, and 28 catches for 169 yards and a score.

"Hopefully we can open it up a little bit for him," coach Adam Gase said. "We've seen a lot of loaded boxes, he's had a lot of tough runs. He's made the most of what he's had and probably gotten us more than what we should have."

Tight end Ben Watson is back for another stint with the Patriots and it's right on time for an offense looking for some stability and more production from the position.

The 38-year-old Watson was re-signed by New England on Wednesday, less than a week after being released. Belichick left the door open for Watson to return, saying he was cut simply because there wasn't an available roster spot once he returned from serving a four-game suspension for a positive banned substance test following last season.

Circumstances changed when Matt LaCosse injured his knee during the Patriots' win over the Giants on Thursday.

Without Rob Gronkowski, the Patriots haven't gotten a ton of production in the pass game from their tight ends. LaCosse and Ryan Izzo have combined for only nine catches for 169 yards.

Michael Bennett will be missing from the Patriots' defensive huddle on Monday night.

The defensive end was suspended for what he said in a statement to ESPN was a "philosophical disagreement" with defensive line coach Bret Bielema. Bennett also offered an apology for any distraction it might have created.

Belichick declined to comment when asked about the suspension this week.

The Patriots traded for the 11-year veteran in March, but his usage has steadily decreased over New England's first six games. Bennett has started just once and played a season-low 11 snaps in the Patriots' win over the Giants in Week 6.