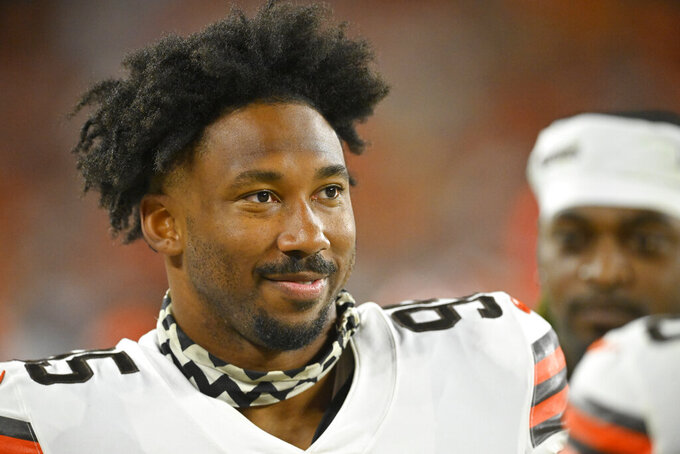 FILE - Cleveland Browns defensive end Myles Garrett stands on the field during an NFL preseason football game against the Chicago Bears, Saturday, Aug. 27, 2022, in Cleveland. Now, more focused, stronger and driven like never before to push himself beyond what he thought possible as he reaches a pivotal point in his NFL career, Garrett has his sights on a new target. He's seeking greatness. Iconic greatness. (AP Photo/David Richard, File)

BEREA, Ohio (AP) — Myles Garrett has spent most of his life chasing quarterbacks — and more often than not — catching them.

He usually gets what he's after.

Now more focused, stronger — if that's even possible — and driven to push himself beyond what he thought were his limits, Garrett has his sights on a new target.

“I want to go down as someone who is remembered not just as a good player,” the star defensive end for the Cleveland Browns said during an AP interview. “But as a great winner, and I know we have to do that together, and so I’m willing to put all the individual stuff to the side, on hold."

Entering his fifth NFL season and embarking on a five-year, $125 million contract extension he signed in 2020, Garrett has changed. He has modified his notion of personal success, become a more vocal and consistent leader and committed himself to making a major impact on the Cleveland community.

“You can always be better as a person,” he said.

For so long, maybe too long, Garrett was preoccupied with sacks, with those flashy statistics bringing the chiseled 6-foot-4, 275-pound powerhouse individual honors and acclaim as one of the game's best players. But it's not enough anymore.

The 26-year-old Garrett, on the brink of becoming the Browns' career sacks leader, has broader goals.

He'll gladly accept Pro Bowl trips and AP All-Pro selections. He’d cherish a first Defensive Player of the Year award (he's yet to get a single vote) for his trophy case, and a league MVP would place Garrett in a select class of defenders.

But he’s seeking another level for his game, and wants to carry the Browns with him.

“When you're young you want this and that,” he said. "And then as you grow older, you think, ‘Damn, I just want to win’ and then you get a little bit older and you think, ’How do you win? What does it take to win? What are you willing to give up to win?'

“And then you realize that winning is ultimately the last step of remembrance. ... They only remember the winners.”

It's taken time for Garrett to see the bigger picture. There was his notable public misstep in 2019, when he struck Steelers quarterback Mason Rudolph with a swung helmet on national TV and got suspended six games. The incident tarnished his image, but also provided motivation.

He has become almost unstoppable.

However, despite being one of three players to record double-digit sacks the past four seasons (Aaron Donald and T.J. Watt are the others), Garrett has not yet put together a complete 17-game run of domination.

He missed two games in 2020 with COVID-19 and struggled after returning. Garrett set a team record with 16 sacks last year, but a groin injury limited to just one sack in the final four games and the Browns finished a disappointing season at 8-9 after being touted as a Super Bowl contender.

Garrett took the team's setback personally, feeling he could have done more.

Always a curious learner, Garrett, who once considered being a paleontologist, did some digging.

Looking for an edge, he read motivational books and studied sports icons, notably Michael Jordan, Tom Brady, Kobe Bryant and LeBron James to see what made them tick, what factors made them consummate winners.

Garrett found a thread, and he has latched onto it.

He's noticeably different, whether it's being more open with media members, holding his teammates accountable or dropping jaws during drills.

“He's playing at another level in practice," Browns defensive coordinator Joe Woods said. “This guy's coming off the edge two feet from the ground. It's impressive. He looks like a running back playing defensive end.

"I definitely feel like his mindset is to be a dominant player this year. I know it always is, but it just feels different from what I saw so far in practice.”

His teammates have taken note of the “new” Garrett as well.

“I feel like he’s gotten way better than he was last year and he was already one of the best defensive players in the NFL," left tackle Jedrick Wills Jr. said. "I feel he’s going to have a really, really big year.”

It starts Sunday, when Garrett opens against Carolina and Baker Mayfield, his former teammate and someone he didn't always mesh with. Garrett will face rookie left tackle Ikem Ekwonu, the sixth-overall pick in this year's NFL draft.

In the past Garrett wasn't shy about stating his goal for sacks in a season.

NOTES: CB Greedy Williams (hamstring) was placed on injured reserve and will have to miss at least four games. ... RB Kareem Hunt dismissed any lingering resentment toward the Browns for not giving him a contract extension this summer and then denying his trade request. “Man, everything’s cool,” he said. “I’m just excited I get to go out there and play football again, the game I love. It is what it is, I’m going to control what I can control."