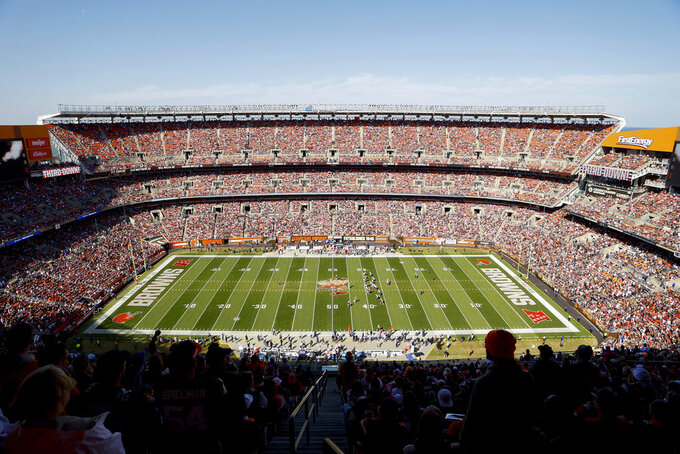 FILE - A general overall interior view of FirstEnergy Stadium during an NFL football game between the Cleveland Browns and the New England Patriots on Oct. 16, 2022, in Cleveland. The Browns are working to repair damage caused to their turf field inside FirstEnergy Stadium ahead of Sunday's game against Tampa Bay after it was vandalized by a vehicle Monday, Nov. 21. (AP Photo/Kirk Irwin, File)

CLEVELAND (AP) — The Cleveland Browns are working to repair damage to their field inside FirstEnergy Stadium ahead of Sunday's game against Tampa Bay after it was vandalized Monday night.

The team said it has provided information to Cleveland police, who are investigating.

At some point overnight, someone broke into the stadium and drove a vehicle onto the grass playing surface, causing “some superficial damage,” according to the team. Aerial TV footage showed looping tire tracks spanning half the field.

The Browns said the stadium's grounds maintenance crew is repairing the surface.

“We take pride in the strong reviews and reputation of our stadium’s playing surface," the Browns said in a statement. "We have been in touch with the NFL on the matter and are confident after repair our field will be ready for Sunday’s game vs. the Tampa Buccaneers.”

The Browns, who have lost six of seven games, have played at the lakefront stadium since their return as an expansion team in 1999.

Last week, the Browns' game at Buffalo was moved to Detroit because of a blizzard that dumped more than 6 feet of snow on the Bills' home field in Orchard Park, New York.