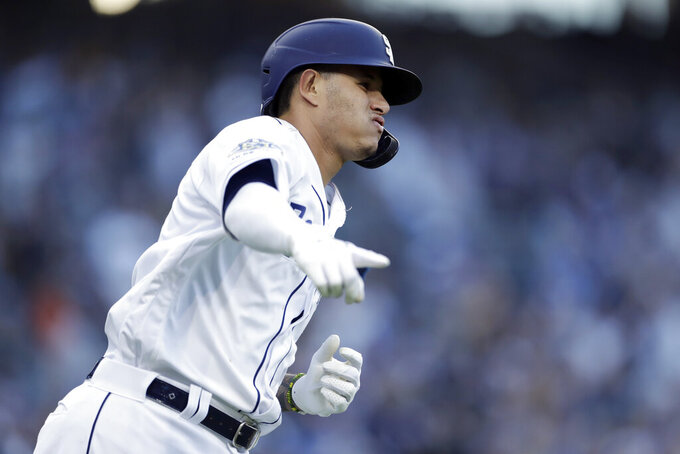 The San Diego Padres' Manny Machado runs the bases after hitting a home run during the third inning of a baseball game against the Los Angeles Dodgers, Saturday, May 4, 2019, in San Diego. (AP Photo/Gregory Bull)

SAN DIEGO (AP) — The Los Angeles Dodgers have scored more runs off Kirby Yates in two games than the San Diego Padres closer had allowed in his first 16 appearances.

Alex Verdugo drew a bases-loaded walk from Yates to bring in the go-ahead run with two outs in the ninth inning and the Dodgers overcame two home runs by former teammate Manny Machado to beat the Padres 7-6 Saturday night.

At 4 hours, 12 minutes, it was the longest nine-inning game in Petco Park's 16-year history.

Max Muncy hit a three-run homer in a five-run sixth for the Dodgers, who won for the seventh time in nine games.

Yates (0-2), the Padres' closer who has 14 saves, lost for the second straight night after once again coming into a tie game. He allowed a leadoff single to Justin Turner and struck out Corey Seager and pinch-hitter Joc Pederson before walking Muncy and hitting Russell Martin with a pitch to load the bases. Yates then walked Verdugo, who had three hits.

Manager Dave Roberts said the Dodgers weren't trying to do too much.

"This guy, National League reliever of the month, has got really good stuff," Roberts said. "Back-to-back day for him. Just for us to be able to run counts, get walks ... I thought Alex took a great at-bat, and honestly all throughout the night I thought we did a great job taking good at-bats."

"He's excitable, he's talented, but he does have that ability to kind of temper it a little bit, those emotions, and still stay in the strike zone," Roberts said. "For him to take the walk right there and that go-ahead run was big."

Verdugo said Yates likes to "feed off the hitter's aggressiveness. Bases loaded, two outs, you can get riled up in that situation, but I just tried to stick with my normal approach. I gave it my rip on the 2-0 and then after that kind of toned it back down to right now we just need a single and was able to recognize both pitches out of the hand going up and away and for balls."

Yates came into Friday night's game having allowed only one earned run in 16 appearances. He allowed the winning run Friday night on Muncy's single with one out in the ninth.

"Today was just one of those days where he wasn't as crisp as he has been," manager Andy Green said.

Ross Stripling (2-2) pitched a perfect eighth for the win and Kenley Jansen pitched the ninth for his 12th save.

Machado homered twice and drove in three runs. He homered in consecutive at-bats against left-hander Rich Hill and for the third time in two games. He hit a solo shot off the Western Metal Supply Co. Building in the left-field corner with two outs in the first inning and then drove another shot into the Padres' bullpen beyond the fence in left-center with two outs in the third.

"I think he's one of the best hitters in the league," Hill said. "I think it comes down to making pitches and making better pitches."

This is the first series between the teams since Machado left the Dodgers as a free agent after their World Series loss to the Boston Red Sox and signed a $300 million, 10-year contract on Feb. 21. Machado hit a monster two-run homer off Clayton Kershaw in Friday night's 4-3 Dodgers win.

Machado came up with runners on first and second and no outs in the fifth before grounding into a double play.

Muncy greeted reliever Brad Wieck with a no-doubt shot to right field with no outs in the sixth, his sixth, to put the Dodgers up 4-3. Wieck came on after left-hander Joey Lucchesi allowed Seager's leadoff single and walked former Padres farmhand David Freese. The Dodgers added on with Matt Beaty's first career RBI, on a pinch single, and on Turner's RBI grounder.

The Padres tied it with three runs against two relievers in the bottom of the sixth. Rookie Ty France hit an RBI double off Joe Kelly, who was pulled after loading the bases. Yimi Garcia came on and Ian Kinsler hit a fly ball down the left field line that was just foul before he was hit by a pitch to bring in a run. Franmil Reyes struck out and then Machado walked to bring in the tying run.

Hill allowed three runs and seven hits in four-plus innings, struck out three and walked one.

New Orleans Saints quarterback Drew Brees, wife Brittany and three of their four children were on the field to watch batting practice. They wore brown No. 9 Padres jerseys that said on the back: Dad, Mom, Brees I, Brees II & Brees III. They have an offseason home in San Diego, where Brees played with the Chargers from 2001-05.

Dodgers: 1B Cody Bellinger wasn't in the starting lineup but was available to pinch-hit after his right shoulder popped out after he made a diving attempt at a grounder Friday night. The shoulder popped back in and Bellinger stayed in the game.

Padres: Rookie SS Fernando Tatis Jr. played catch before the game, his first baseball activity since spraining his left hamstring last Sunday at Washington and going on the 10-day IL. Green said Tatis is "feeling good" and the Padres hope for a short timeframe for his return.