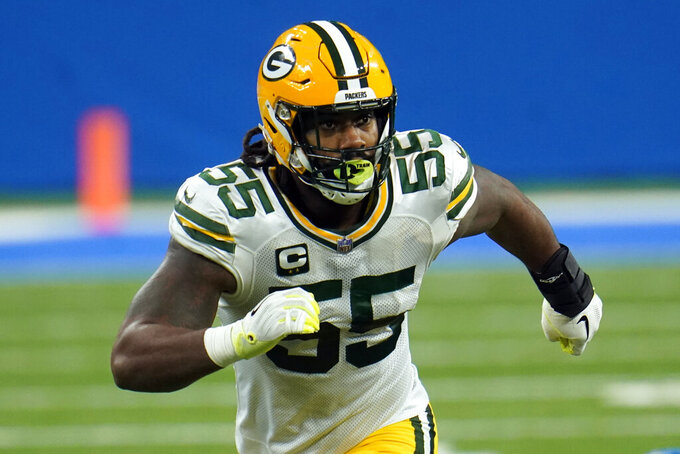 MINNEAPOLIS (AP) — Three years ago at the Pro Bowl, Danielle Hunter autographed a jersey and gave it to his NFC teammate, Za'Darius Smith, with an inscription that raised the possibility of a future reunion.

Smith agreed to a three-year contract worth $42 million with the Vikings on Tuesday, giving the team a pass-rushing boost it badly needed to complement Hunter.

Speaking to reporters at Vikings headquarters after his deal was done, Smith shook his head and smiled as he recounted that interaction with Hunter at the NFL's annual all-star game.

“Big shoutout to Danielle Hunter, man. I'm happy to be here to get a chance to play with him,” said Smith, whose contract has incentives that can boost the maximum value to $47 million.

The 29-year-old Smith was a Pro Bowl pick in 2019 and 2020 with a combined 26 sacks in 32 games for Green Bay, but he had a major back injury last season and appeared in only one game for the NFC North champions.

The Packers released Smith last week. He reached an agreement to return to his original team, the Baltimore Ravens, but that contract — according to multiple reports — fell through.

“I love Baltimore. I want to thank Baltimore for giving me the opportunity when they drafted me. But, you know, things didn’t work out. And in my heart I just wanted to be somewhere I knew the coaching staff and I didn’t have to go that far,” Smith said. "Just being here is exciting, man, and I’m just ready to elevate and better my game.’’

Smith's position coach for his entire time with the Packers was Mike Smith, who now has the same job with the Vikings. What's more, Green Bay's defensive coordinator in 2019 and 2020 was Mike Pettine, who is now the assistant head coach for Minnesota.

“Those two guys stood on the table to get this player here, and they couldn’t be more excited about having him here,” Vikings coach Kevin O'Connell said. “His energy and juice is real. I think it’s resonated through this whole building since he walked in yesterday.”

Hunter played in only seven games in 2021 because of a torn pectoral muscle after missing the entire 2020 season due to a neck injury. Health questions will follow him and Smith into the fall, but Smith, for his part, said the bulging disk problem that required surgery and a four-month recovery last year is behind him.

The Vikings also signed backup quarterback Sean Mannion on Tuesday to keep in place a trusted and valued support for Kirk Cousins for a fourth season.

The lineup on offense is largely unchanged. Hunter, whose $18 million roster bonus was converted to a signing bonus for salary cap relief, according to ESPN, is back to lead the defense along with fellow stalwarts Eric Kendricks and Harrison Smith. Though the Vikings made wholesale changes to their front office and coaching staff, the roster is only under minor construction.

“We hunt and search unique opportunities. We thought Za’Darius was a unique opportunity for a lot of reasons,” general manager Kwesi Adofo-Mensah said. “First and foremost, he’s a proven player with an extensive track record in this league. His experience as a player. He’s normally a motivated player, but I think he’s extra motivated to resume his position among the league’s best where he belongs. His experience in the division. He has a great working relationship with two of our most respected coaches. He gets what we’re trying to do, and couldn’t be more excited to have him.”