Vikings DB coach Scott has worked his way up with confidence 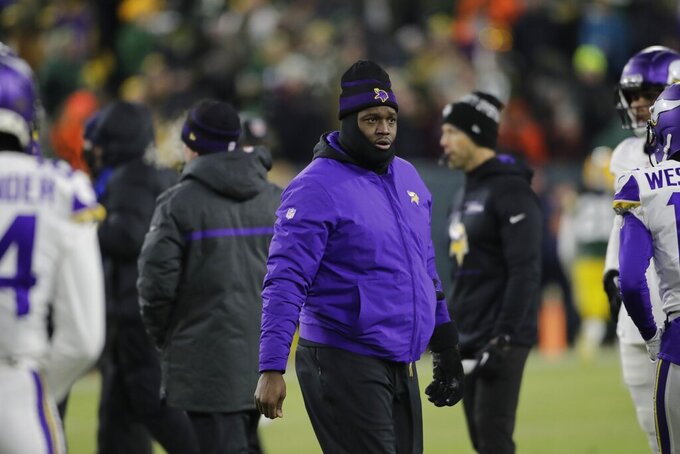 EAGAN, Minn. (AP) — Confidence might be the most critical of the ingredients necessary for coaching in the NFL, working in a high-stakes league and such a high-intensity sport.

That's the gist of how Karl Scott got the job with the Minnesota Vikings before this season as their defensive backs coach, a first-timer in the NFL who worked his way through the college ranks with stops at seven programs over his first 14 years in the business.

His interest was sparked while playing at McMurry University, an NCAA Division III program in Abilene, Texas, then coached by Steve Keenum. Scott realized his limitations on the field and his desire to stay in the game, so he sought Keenum's advice and insight one day over lunch.

Keenum told him to pick five schools he'd be interested in coaching for.

“Me being naive, I was like, ‘Texas, LSU and everybody else,’” Scott said. “He handed me the list back and said, ‘Hey, Karl, it's great to have aspirations, but you also want to get somewhere where you can gain some experience.”

He started as a volunteer at Hardin-Simmons, another Division III program across town, while finishing his exercise and sports studies degree at McMurry. Thus began a fascinating journey into the fast-paced and minimal-sleep lifestyle of football coaching.

The head coach at Hardin-Simmons was Jimmie Keeling, who was 71 at the time. He was impressed enough by Scott's work to give him a $1,000 check and some life-changing encouragement.

“He said, ‘I see something in you. Keep on doing what you're doing, and you'll be the head coach of the Green Bay Packers one day,'” Scott said in an interview after Vikings practice earlier this season, acknowledging the awkwardness of that anecdote after breaking into the league with a longtime rival of the Packers.

Scott is Black and thus in the category of coaches the NFL has been trying to better support in light of its well-documented lagging in promotions of minority race assistants to leadership positions. Since the Rooney Rule was instituted in 2003, only 27 of 127 head coach vacancies (21%) have been filled by nonwhites in a league with Blacks accounting for about 70% of the players.

The Houston native isn't worried about a big-picture issue like that, with plenty on his plate this season in his work with Minnesota's secondary. He's had a wide range of personalities and abilities to work with, from the 14 combined Pro Bowl selections for cornerback Patrick Peterson and safety Harrison Smith to the on-the-job-training struggles of cornerbacks Cameron Dantzler and Kris Boyd.

There has been a steady stream of setbacks to navigate, from injuries to COVID-19 absences to the surprise release of starter Bashaud Breeland last month.

“Coach Karl stepped into the room like he’s been here for 10 or 12 years,” Peterson said. “He does a great job of communicating with players, making sure that we’re more than prepared when we step out on the field.”

The fact that Scott’s first NFL job came with the Vikings stands as one of those intriguing connections in his budding career that can only make him smile, whether coincidental, fateful or somewhere in between.

Keenum is the father of Case Keenum, who quarterbacked the Vikings to the NFC championship game four years ago. When Scott was a freshman in 2003, he stayed on campus during Thanksgiving break and had his holiday dinner at the Keenum family home when Case was a sophomore in high school.

One of Scott's colleagues at Hardin-Simmons helped hook him up with his first real job, as a graduate assistant at Division II Delta State in Mississippi in 2007. There he worked under co-defensive coordinator Dave Aranda, now the head coach at Baylor.

Then-Delta State head coach Ron Roberts recommended Scott for an assistant's position at Division II Tusculum in Tennessee, where Pete Golding — a future colleague of his at Alabama — was the defensive coordinator.

Four seasons at Tusculum led to his first Division I opportunity and three years under Roberts at Southeastern Louisiana, where he became defensive coordinator for the first time in 2014. Then came his first FBS job at Louisiana Tech in 2015, followed by his first crack at a power conference program with two years at Texas Tech.

Three years learning under Saban at Alabama, where he tutored future NFL standouts Patrick Surtain II and Trevon Diggs, was enough to catch the attention of the Vikings when their vacancy in the secondary opened a year ago.

“Every piece of the journey I’ve been on, I’ve picked up valuable experience. That foundation really helped me, looking back now," said Scott, who's married with two children. “Like a lot of us, I didn't have a father in my life, so those coaches were the first men to kind of reprimand me, correct me, hold me accountable.”

His mother was always there for that, too, including when he was hired at Tusculum at age 22 for a $24,500 salary.

Aranda was the source of some of the best advice Scott has received: “It's not about places. It's about people.”

Following that credo will serve any coach well, and Scott has clearly been a strong relationship builder. His next opportunity could come soon, too, on Napier's staff at Florida. According to a report by The Athletic, Scott has been targeted by the new head coach of the Gators to be a co-defensive coordinator and inside linebackers coach.

“I’m not tackling. I’m not covering. I’m not doing that stuff. I’m on the sideline. So how can I get that guy to see it the way I see it and get him to maximize his ability?” Scott said. “I was once told, ‘You can never teach somebody something new. You can only bring out of them what they already know within themselves.’”