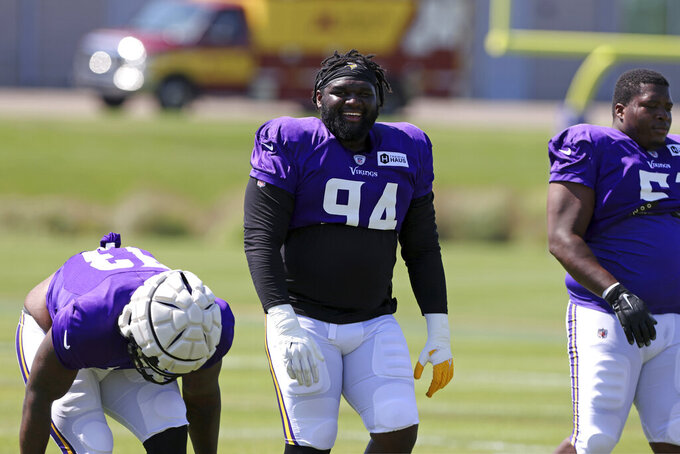 EAGAN, Minn. (AP) — The switch in schemes by the Minnesota Vikings and their edge rushing potential has dominated the narrative around their defense this season.

With new addition Za'Darius Smith and healthy returner Danielle Hunter, the Vikings are well-stacked at the outside linebacker spots as long as the duo can stay out of injury trouble.

The rebound they're seeking in 2022 likely won't amount to much, though, without a consistent effectiveness by Dalvin Tomlinson and Harrison Phillips at the interior positions.

“If you don’t get the run stops, it’s not going to be a lot of fun. They’re going to dictate everything they want,” defensive coordinator Ed Donatell said.

There will be another starter in the base alignment, with fourth-year defensive tackle Armon Watts the leading candidate for the minority of situations when the Vikings aren't in their typical three-cornerback nickel package. Tomlinson and Phillips, though, will have vital roles, and they'll be asked to produce a pass rush, too. The current NFL demands more from interior defensive linemen than simply plugging a gap.

Phillips had one sack last year for Buffalo, before coming to Minnesota as a free agent. Tomlinson had 2 1/2 sacks in his first season with the Vikings in 2021.

“After we continue to build the chemistry up front, the sky is the limit because we have so much talent across the board,” Tomlinson said. “Especially with those guys on the edge, you can’t ignore both of them. That frees up a lot of us on the inside. It’s going to be super exciting.”

Tomlinson (325) and Phillips (307) have a listed 632 pounds to put the pressure on opponents. Tomlinson has the gentle-giant type of personality, his face lit up when he detailed a trip to Disney World during the offseason with his younger cousins. Phillips has the nickname “Horrible Harry” from his favored series of books as a child, a supersized-from-birth presence who has received multiple community service honors since entering the league with the Bills.

Stopping the run is naturally his forte, a former wrestler who relishes the one-on-one matchups at the line, but he's fully aware of his dual responsibility.

"Any way that you can collapse the pocket and put pressures, hits, hurries – that stuff adds up. Even if you’re not getting home and not really getting the sack totals high, you can affect the quarterback by his eyes, his hands and his feet.

The middle men, of course, will be just as important on the other side of the ball where the Vikings have been as vulnerable over the last several seasons as any area on their roster.

There will be another new starting right guard this year, likely Jesse Davis with Chris Reed and Ed Ingram also under consideration. Over the previous six seasons, the Vikings have given 11 different players at least one start at right guard.

The center spot is even more critical to shore up, with 2019 first-round draft pick Garrett Bradbury on an expiring contract with his substandard pass blocking still a concern.

Head coach Kevin O'Connell said on Saturday that he considers the position an open competition despite the durable Bradbury having made 45 of the 48 starts there over the last three years. Reed and Austin Schlottmann have also taken turns in training camp.

Bradbury missed two games last season due to COVID-19 and was benched for the next game before regaining his spot.

“I think he has the strength to hold up. I think he’s got the technique to hold up. I think we can do some things with how we protect to try to limit some of those situations where that’s happened,” O'Connell said, referring to Bradbury's susceptibility to overpowering interior pass rushers.