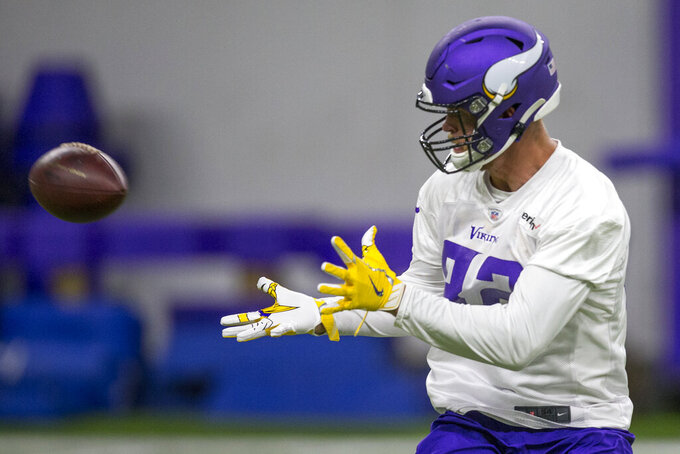 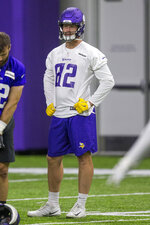 EAGAN, Minn. (AP) — The Minnesota Vikings weren't willing to part with Kyle Rudolph despite their lack of salary cap space, and the ninth-year tight end sure didn't want to leave.

No matter the tricky nature of making the numbers work for both sides, the mutual desire to keep the team's longest-tenured offensive player in place was the driving force behind a four-year contract extension Rudolph signed on Tuesday with the Vikings .

"I've bumped into a few people in the last week or so, and that was probably the number one question I got: 'How's Kyle? Is Kyle going to be here?' And every one of them, when I said, 'Yeah,' were all glad," coach Mike Zimmer said. "That's the kind of guy he is in the community and how he represents the Vikings."

Rudolph had entered the final year of his current deal with a $7.25 million non-guaranteed salary, putting him at risk for being released after the Vikings drafted Alabama tight end Irv Smith Jr. in the second round.

Making a rookie the primary player at that position would have been a big burden on Smith, though. As last season proved, the Vikings need to give quarterback Kirk Cousins as many options in the passing game as possible after wide receivers Adam Thielen and Stefon Diggs drew heavy attention during the second half of the schedule.

"I want to be a part of the first team to win a championship here," Rudolph said. "We got a taste of it two years ago. When we got close, you had a feel for how important that would be to this state, to this community, to this fan base."

The exhaustive work by Vikings executive vice president of football operations Rob Brzezinski and Rudolph's agents, Brian Murphy and Camron Hahn, produced a contract with a value of $36 million in new money and a little more than $16 million in total guarantees. After a conversion of base salary to signing bonus that reduced Rudolph's cap hit, he'll make a fully guaranteed $9 million this year. By almost any measure of contract value, Rudolph will be among the five highest-paid players in the NFL at his position.

"It was easy for me to come out here and just focus on football, because I had two agents that I trust and I play for an organization that I trust," Rudolph said after the team's first practice of a three-day minicamp.

Rudolph, a two-time Pro Bowl pick who had 64 receptions for 634 yards and four touchdowns in 2018, has remained a key cog in the offense though never quite reaching the levels of productivity of peers such as Rob Gronkowski, Travis Kelce, Zach Ertz, Greg Olsen or Jason Witten have over the duration of his career. He is second among tight ends in Vikings history in catches and yards. Having played in every game over the past four seasons, Rudolph has a streak of 65 consecutive games started that is a franchise record and the longest active run by a tight end in the league.

"I feel better now from a physical standpoint at 29 than I did at 21," Rudolph said. "You just learn how to take care of your body."

The native of Cincinnati and product of Notre Dame has spoken often about how at home his family has felt in Minnesota . He's a two-time nominee for the Walter Payton NFL Man of the Year Award for community service .

"There's a reason why I had no interest in testing free agency," Rudolph said. "It's because of the culture that they've established around here, and culture is what ultimately brings championships. In this league, the talent level is so even across all 32 teams, and if you don't have good culture then you don't have a chance."