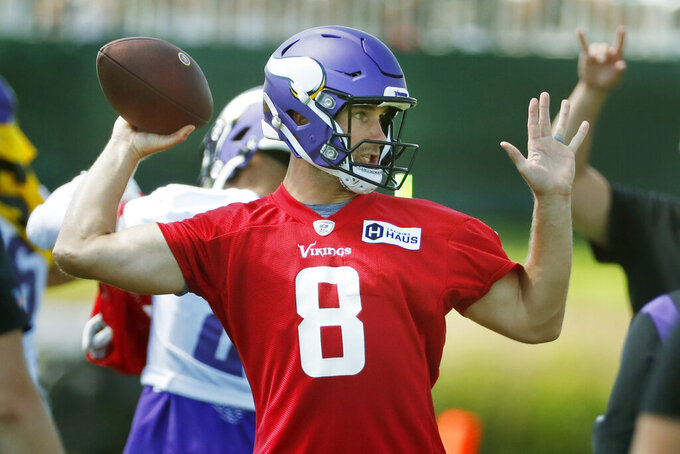 EAGAN, Minn. (AP) — The evidence of Irv Smith Jr.'s rejuvenated outlook jumps out from underneath his chinstrap, an ink outline of a butterfly on the left side of his neck that signifies a fresh start.

After a freak knee injury that occurred while making a pedestrian weakside block in a preseason game, knocking him out of the 2021 season, Smith has returned his enviable tight end skills and up-for-anything personality to a Minnesota Vikings offense that badly missed him. Fully recovered from surgery to fix a torn meniscus, Smith has been cleared to practice without limitation.

“It’s like a new beginning. All the things I’ve done in my past, I still reflect on, but I’m excited for what the future holds for myself, the team, the offense,” Smith said.

For further motivation, the third-year player — and son of former NFL tight end Irv Smith — added an even larger tattoo on the other side of his neck depicting his mother, Rose Matamoros. Then there's another superhero inked on his right hand: The Incredible Hulk.

“We're about to smash some folks,” Smith said with a wide grin.

The 2020 second-round draft pick out of Alabama, who turns 24 on Aug. 9, rarely goes long without smiling. His confident and upbeat demeanor certainly came in handy during the double-whammy slog of knee rehab, a grueling process made potentially more frustrating by the powerless feeling of being sidelined and unable to contribute.

“That’s kind of life. Things get thrown at you that you're not expecting, but it’s how you bounce back,” Smith said. “You have to keep looking forward. You can’t look back.”

Considering the amount of attention Justin Jefferson, Adam Thielen and Dalvin Cook have commanded from opposing defenses, a strategy that's unlikely to stop, there's a clear opening for Smith to seize a vital role for the Vikings. That's what everyone was anticipating last season, after much of Smith's playing time was chewed up by veteran Kyle Rudolph in 2019 and 2020.

“I felt he was one of our most impactful players in training camp last year,” quarterback Kirk Cousins said.

The athleticism and versatility Smith possesses to be able to line up at the traditional end spot in a three-point stance, in the backfield, the slot or even split wide makes him a sound fit with the new offense under head coach Kevin O'Connell.

O’Connell and offensive coordinator Wes Phillips, who built their philosophy with Super Bowl champion Los Angeles, have quickly pointed to Rams tight end Tyler Higbee as their preferred prototype for the position as a capable blocker with downfield speed to burn. Phillips was the tight ends coach for the Rams.

“When Irv really opens it up, there’s a lot in the tank there,” O'Connell said on Saturday, before the Vikings staged their first full-team practice of training camp that was open to fans.

The fact that the workout included Smith was a significant win for the Vikings.

“I feel like I got faster, honestly, through this process, just giving my whole body a reset,” Smith said. “I’ve never really had this kind of break before. I’ve been playing sports my whole life. Reflecting and working on things that I wanted to work on that I usually wouldn’t have the time to work on, it’s been really good.”