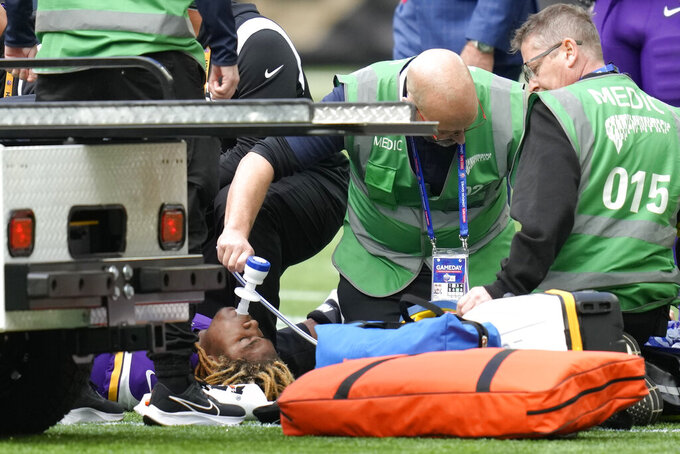 After accounting for the 6-hour time difference and a successful download of the Zoom app on Cine's phone, they finally connected.

The entire Vikings team was waiting for him on the video conference, starting their morning meeting with a roar of support for their injured mate.

Then came the singing of “Happy Birthday” in honor of Cine turning 23 in a most unexpected place — a hospital overseas.

“We’ve got his back,” fellow safety and special teams player Josh Metellus said. “Just seeing a smile on his face after what happened to him, that just livens us up more — just knowing that a guy could go through that and still wanted to see how we were doing, congratulating us on the win.”

Cine was blocking on the punt return team in the first quarter at Tottenham Hotspur Stadium when he suffered the gruesome injury, a compound fracture in which the bone punctured the skin. He had a preparatory procedure on Sunday after Minnesota beat New Orleans 28-25 and the full operation on Tuesday at the Cleveland Clinic London Hospital performed by Dr. Aswinkumar Vasireddy, the orthopedic trauma group lead surgeon.

Cine was expected to return to Minnesota on an NFL-provided private plane at the end of the week, O'Connell said.

“I cannot say enough good things about the care he has received,” O'Connell said.

Drafted with the 32nd overall pick from Georgia's national championship team, Cine was brought along slowly in training camp and beaten out by second-year player Camryn Bynum for the starting safety spot next to six-time Pro Bowl pick Harrison Smith. Cine had been limited to special teams, where his first NFL season ended in a fluky and painful fashion. He was placed on injured reserve on Tuesday after the surgery.

O'Connell was Washington's quarterbacks coach in 2018 when Alex Smith suffered a compound fracture in his right leg with breaks to both the tibia and the fibula. He needed two years to recover, and O'Connell acknowledged thinking “quite a bit” about Smith's injury in the aftermath of Cine's.

“Just seeing that and seeing the look on his face, I just wanted him to know I was out there with him at the time and that everything was going to be OK. Because I believe that,” O'Connell said.

Asked about Cine's future, O'Connell said he's confident he'll be back on the field next season.

"I just have such strong belief in Lew and his work ethic,” O'Connell said.