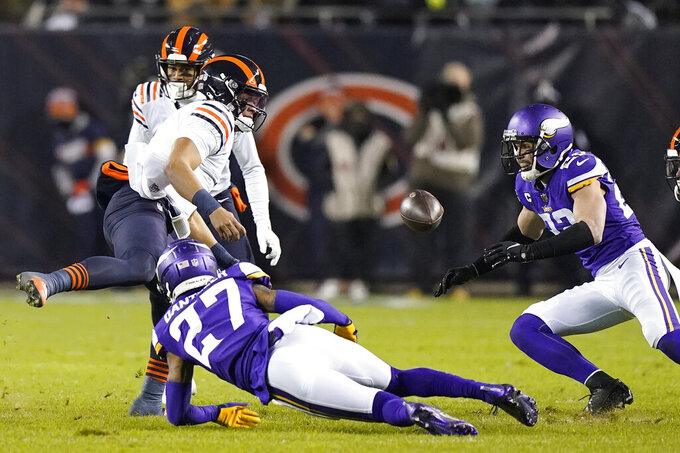 Dantzler was left inactive due to a calf injury. He had been listed as doubtful on the Vikings’ injury report.

Minnesota will have tight end Tyler Conklin available. Conklin had been questionable with a hamstring injury, though he was a full participant in Friday’s practice.

The Vikings already knew they’d be playing this game without quarterback Kirk Cousins and receiver Adam Thielen. Sean Mannion is expected to start in place of Cousins, who went on the reserve/COVID-19 list Friday. Thielen was placed on injured reserve with an ankle injury.

A loss Sunday would knock the Vikings out of playoff contention.

The Packers’ list of inactive players includes safeties Shawn Davis and Vernon Scott, offensive tackle David Bakhtiari, tackle/guard Billy Turner and defensive lineman Jack Heflin. The Packers also announced that cornerback Jaire Alexander, who hasn’t played since Oct. 3 due to a shoulder injury, has been placed on the reserve/COVID-19 list.

Packers defensive lineman Tyler Lancaster is active. Lancaster had been listed as questionable due to a back injury.

Earlier in the day, the Packers announced that punter Corey Bojorquez, guard Ben Braden, linebacker Oren Burks and tight ends Marcedes Lewis and Tyler Davis have been medically cleared to play. They all had been placed on the reserve/COVID-19 list in the week leading up to the game.