Von Miller settles in with Bills after leaving LA Rams 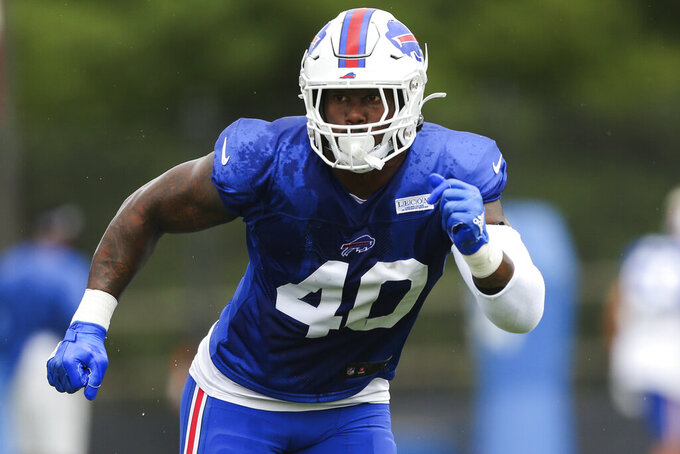 FILE - Buffalo Bills defensive end Von Miller (40) takes part in a drill during practice at the NFL football team's training camp in Pittsford, N.Y., Thursday, Aug. 4, 2022. The memories are too fond, and the bonds formed too tight for Von Miller to say anything negative about the Los Angeles Rams even as the Buffalo Bills’ newly signed pass rusher prepares to face his former team in the NFL’s season opener on Thursday, Sept. 8. (AP Photo/Joshua Bessex, File)

ORCHARD PARK, N.Y. (AP) — The memories are too fond, and the bonds formed too tight for Von Miller to say anything negative about the Los Angeles Rams even as the Buffalo Bills’ new pass rusher prepares to face his former team in the NFL’s season opener on Thursday night.

“They came and got me at a time when I really needed that. They refreshed me,” Miller said on Sunday, before listing the many friendships he made — from defensive tackle Aaron Donald to equipment director Brendan Burger — in his brief, successful stint with the Rams. “I can never hate L.A.”

What’s also true about the NFL’s active leader in sacks is how much he’s warmed to his new surroundings. Miller, after all, readily acknowledged second-guessing his decision to leave behind the bright lights of Hollywood and his second Super Bowl championship for Buffalo right up to the moment the 33-year-old signed a six-year contract in March.

“I still remember it like yesterday, coach McDermott saying, `It’s Buffalo. I know it doesn’t have the optics, but you will learn to love this place,‘” Miller said, referring to Bills coach Sean McDermott.

“When he said it, I thought it was part of the recruiting pitch,” he added. “But being here in western New York ... I just feel at home. I’ve fallen in love with the place, and it just gets better and better each and every day.”

Perhaps, it’s the care packages of toilet paper that piled up at his dorm room door at training camp, and sent by Bills fans after Miller questioned the quality of the tissue players were issued. Maybe, it was the call he recently received from his new neighbor, alerting Miller that his garage door was open.

And it’s difficult for Miller to ignore Buffalo’s talent-laden roster, featuring a dynamic Josh Allen-led offense and a defense which led the NFL in numerous statistical categories last season to make him a true, ahem, Bill-iever.

“You’re watching clips of (defensive tackle) Ed Oliver and seeing the player he is. You see Josh Allen (receiver Stefon) Diggs and it definitely helps,” Miller said in April. “You know, being here for the start of OTAs, it’s definitely put me at peace. I’m excited to go. I’m ready to go win a Super Bowl for the Buffalo Bills.”

Expectations have been high in Buffalo since 2020, when the Bills won their first AFC East title in 25 years and reached the conference championship before losing to Kansas City. Miller’s addition raises the temperature further by muscling up what had been a middling pass rush.

“Von Miller, there’s only one in the league. Like there’s only one Aaron Donald in the league that can effectively change the game on a constant basis and something that we haven’t had for a long time,” Bills Hall of Fame defensive end and the NFL's career sacks leader Bruce Smith told The Associated Press in June. “If he stays healthy, he will be the missing piece that we needed to complete this quest for a Super Bowl title.”

Miller’s presence alone could have made the difference last season when the Bills squandered a three-point lead in the final 13 seconds of an eventual 42-36 loss to the Kansas City Chiefs in the divisional round of the playoffs. Jerry Hughes, whom Miller replaces, was a half-step away from sacking Patrick Mahomes in what could have ended the Chiefs’ two-play, 44-yard drive which set up Harrison Butker’s 49-yard field goal as time expired.

Miller showed he hadn’t lost a step after being traded by Denver to the Rams in November. After getting five sacks in eight regular-season games with L.A., Miller added four more in the playoffs, including two in the Rams' Super Bowl victory over Cincinnati.

“Von is 33, but that boy is 23. He moves better than anybody on the football field,” Bills left tackle Dion Dawkins said.

“The word I would use is an elastic band or a rubber band, because he’s just real springy and real slithery,” he added. “We’re all big and strong, so if I were to hit somebody, it would be ‘boom!′ When you hit Von, it’s more like ’voom,′ like how did that not hit like it’s supposed to hit?”

Bills center Mitch Morse said the prospect of the Bills lining up Miller and Oliver on the same side as being almost like “cheating” because of the mismatches they can create.

Miller’s impact has already extended into a leadership role with him being selected a defensive captain. He's taken Buffalo’s young group of defensive ends under his wing, including having them attend his annual pass-rush summit in June, which brings together many of the NFL’s top threats.

For all he's accomplished entering his 12th season, Miller is focused on the future, while acknowledging how “weird” it might be watching the Rams celebrate their — and his — Super Bowl title this week. Miller hasn’t flashed his new championship ring around Buffalo, and doesn’t plan to while keeping it locked up as he did with the ring he won with the Broncos in the 2015 season.

“Even though it is a special moment, I don’t want that to be my determining moment in my career,” Miller said. “I want to make other moments just like that.”