Washington defense needs to earn back praise amid struggles 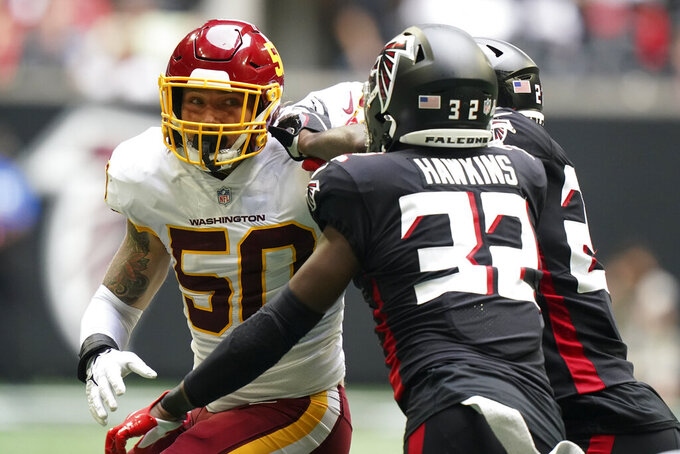 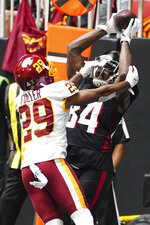 Bobby McCain took the occasion of Washington coming back to beat Atlanta to embrace the criticism of the defense that has surrounded the team so far this season.

McCain told reporters to keep writing everything when the defense starts playing well. That certainly was not the case Sunday when the Falcons put up 30 points and 374 yards, with Taylor Heinicke and the offense coming to the rescue.

Washington's defense that came in with lofty expectations and was projected to be among the NFL's best has been among the worst and will need to earn back the praise heaped on the unit over the summer.

“We know we have corrections to make,” said McCain, a veteran defensive back who's one of a few additions to the defense this season. “We’ll take it to the chin defensively and understand we got to keep getting better, man. We’ve got a long road ahead of us.”

That road includes upcoming matchups against New Orleans and Kansas City at home and Green Bay and Denver on the road before the bye week. It's quite the gauntlet for a team that's allowing 30.5 points and 417.5 yards a game so far and lucky to be 2-2.

“We haven’t been achieving our standards,” defensive tackle and captain Jonathan Allen said. “The biggest thing is to not point the finger. On every play you can see something that each one of us has to do better, and we will do it better.”

Washington is also preparing this week without head athletic trainer Ryan Vermillion, who was put on administrative leave Monday for what a spokesman called “an ongoing criminal investigation that's not related to the team.”

Heinicke and the offense are getting the job done. Down 30-22 in the fourth quarter, Heinicke led scoring drives of 70 and 76 yards to pull off the comeback, capping them with touchdown passes to Terry McLaurin and J.D. McKissic.

Everything seems to be clicking thanks to Heinicke, who was out of football a year ago and is now the toast of Washington Football for his ability to make something out of nothing.

“That’s an advantage for us how mobile he is,” McLaurin said. “He's smart with the ball. Even when he's scrambling around, his eyes stay downfield. He knows when to tuck it and run it. He knows that he can give us opportunities to make plays down the field, as well.”

Washington's third-down defense ranks last in the NFL and is on pace to be the worst since at least 2000. Opponents are converting 59.7% of the time.

“We got to get off the field on third down — that’s been haunting us all year," McCain said. “It's just little things. It’s 11 guys on the field, man. If one guy’s not doing their job, then that’s a first down.”

Curtis Samuel made four catches for 19 yards in his season debut after missing the first three games to get right from a nagging hamstring injury. It's no coincidence that with Samuel on the field, McLaurin was freed up for six catches and 123 yards.

Kicker Dustin Hopkins is 7 of 8 on field-goal attempts this season and hit the Week 2 game winner against the New York Giants. But two missed extra points at Atlanta put Hopkins back in the spotlight for the wrong reasons.

“He’s our kicker, and we’ll leave it at that," coach Ron Rivera said.

Linebacker Jon Bostic (pectoral muscle) and cornerback Torry McTyer (knee) are expected to be out for the rest of the season, according to Rivera. Guard Brandon Scherff, a 2020 All-Pro selection, is expected to miss time with a right knee injury and tight end Logan Thomas with a hamstring injury.

101 — Yards on DeAndre Carter's kickoff return TD to open the second half against Atlanta. Washington has a true return specialist for the first time in years, and Carter's big-play potential helps mitigate some of the defensive struggles.

The same old stuff: Figuring out what's wrong on defense and attempting to fix it before hosting the Saints on Sunday. At first, the mistakes appeared to be missed assignments by players, but now it's time for Rivera and defensive coordinator Jack Del Rio to adjust schemes to put the unit back on the rails.