Washington LB Davis out vs. Cowboys as COVID-19 precaution 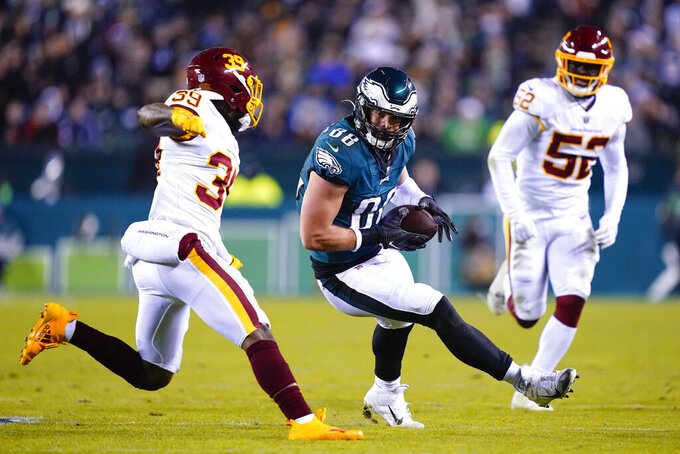 Philadelphia Eagles' Dallas Goedert, center, runs with the ball during the first half of an NFL football game against the Washington Football Team, Tuesday, Dec. 21, 2021, in Philadelphia. (AP Photo/Matt Rourke)

ARLINGTON, Texas (AP) — Washington rookie linebacker Jamin Davis is inactive against the Dallas Cowboys after reporting to team doctors with possible COVID-19 symptoms before the game.

The club said there wasn't enough time to process a COVID-19 test for Davis before the 90-minute deadline prior to games for reporting inactive players. The 19th overall pick in this year's draft was held out as a result.

Davis had been dealing with a shoulder injury, but was a full participant in practice Thursday before being held out Friday for what was listed as a non-injury reason.

Running back Antonio Gibson is active for Washington despite a toe injury similar to the one that derailed him late last season.

The Cowboys gained two defensive backs in safety Donovan Wilson and cornerback Maurice Canady. Wilson had missed the past five games with shoulder and chest injuries. Canady hadn't played since Week 6 because of a concussion.

The other Dallas inactives are quarterback Will Grier, safety Israel Mukuamu and cornerback Kyron Brown, who had been promoted from the practice squad as a COVID-19 replacement.