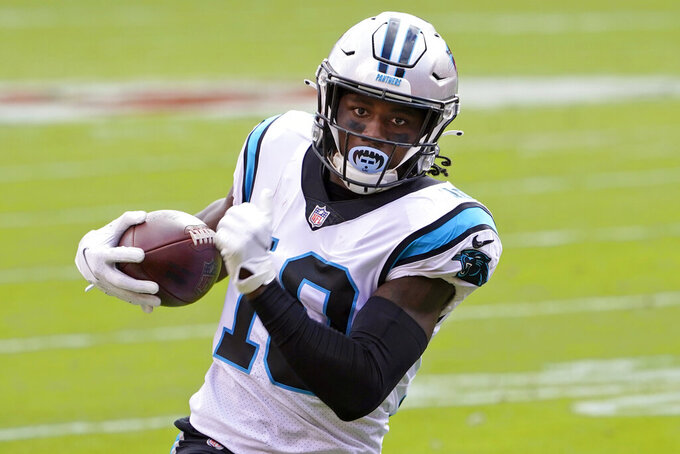 FILE - In this Nov. 8, 2020, file photo, Carolina Panthers wide receiver Curtis Samuel (10) runs to the end zone against the Kansas City Chiefs during the first half of an NFL football game in Kansas City, Mo. Washington has been practicing without receiver Curtis Samuel for the balance of training camp and without cornerback William Jackson for the past week. Samuel and Jackson were the team's highest-priced free agent additions.(AP Photo/Orlin Wagner, File)

ASHBURN, Va. (AP) — Curtis Samuel's chances of playing in Washington's season opener this weekend against the Los Angeles Chargers took a hit Wednesday when the wide receiver appeared to tweak a groin injury that has been bothering him for months.

Samuel was supposed to practice for the second time in three days after missing all of camp with the groin injury and a stint on the NFL's COVID-19 list.

Instead, he aggravated it during an individual drill and was listed as “did not practice” on the team's mandatory injury report.

“He came out and warmed up, wasn’t feeling quite as well as we’d hoped he would, so we’ll just continue to monitor it and see how he is tomorrow morning,” coach Ron Rivera said.

Samuel's status being day to day is a red flag, considering Washington plays two games in five days to start the season. With the New York Giants up next the following Thursday night, Samuel could miss the first two weeks and be a candidate for three-week injured reserve.

Rivera refused to speculate on the possibility of Samuel going on IR, and quarterback Ryan Fitzpatrick said, “Curtis is going to be a big part of what we do” offensively when healthy.

Each praised Dyami Brown and Cam Sims who would have elevated roles if Samuel is out, and Washington also has Adam Humphries and DeAndre Carter to mix in behind No. 1 receiver Terry McLaurin.

"It’s a good group," Rivera said. "If Curtis plays, great, and if he doesn’t, great because we’ve got a lot of confidence in the other guys.”

Samuel, 30, has dealt with the groin injury since offseason workouts, so he has not gotten the opportunity to build chemistry with Fitzpatrick like other receivers.

But Samuel is familiar with offensive coordinator Scott Turner's system from their time together in Carolina, so there's a belief internally that he does not need a lot of practice snaps to get acclimated.

Washington's other receivers getting some of those extra catches could help now that Samuel's ability to play is in significant doubt.

“The unique part about it is we’ve got some young guys who have been able to get some reps while he’s been out and they’ve developed really well,” McLaurin said. “We have confidence in those guys if Curtis can’t go Sunday.”

Washington signed Samuel to a three-year contract worth $34.5 million in the hopes that he’d add a dynamic element to an offense that struggled last season.

“(He is) another playmaker for our offense,” McLaurin said. ”Obviously bringing him here was another piece that we felt like we could add to our group that was dynamic, a guy who can take the ball out the backfield, who can stretch the field vertically and can just make things happen when the ball’s in his hands."

It now might take a few more weeks to see that.