Watson shines, but Texans have problems to fix after loss 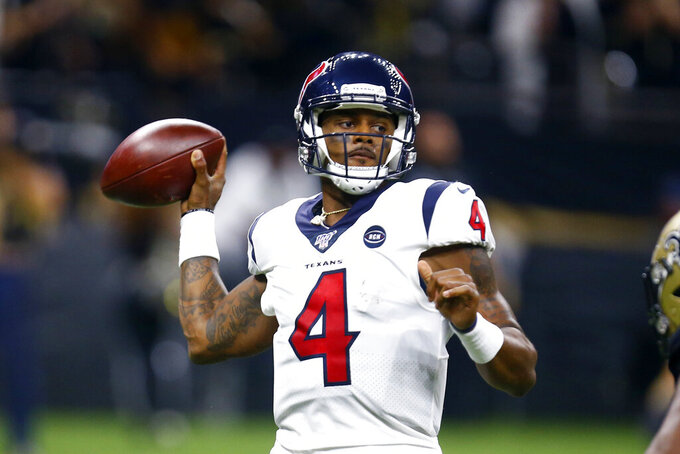 HOUSTON (AP) — Deshaun Watson did it all for the Houston Texans in their opener against New Orleans, throwing for three touchdowns and running for another one.

The Texans still left New Orleans with a loss because of a variety of problems, namely struggles on the offensive line and in the secondary.

Watson capped his big game by moving the offense 75 yards on just two plays, capped by a 37-yard touchdown pass to Kenny Stills to give Houston a 28-27 lead with just 37 seconds left.

But he didn't win Monday night as Houston's porous secondary wasn't able to keep Drew Brees from getting the Saints into field-goal range and the Texans lost 30-28 on Wil Lutz's 58-yard kick as time expired.

"There's things we can do communication-wise and coaching that we can do better," O'Brien said. "We just have to keep working to improve."

Watson was able to shine on Monday night despite taking another beating. The third-year quarterback, who was sacked an NFL-high 62 times last season, was sacked six times and hit another 11 by the New Orleans defense despite playing behind new left tackle Laremy Tunsil.

Houston sent two first-round picks and one in the second round to Miami for Tunsil and Stills on Aug. 31 as the Texans looked for a way to better protect Watson. Though he still got hit way too much in the opener, O'Brien said that Tunsil did some good things in his debut and that he'll only get better with more practice time.

Houston's offense looked sharp against the Saints with Watson connecting again and again with star receiver DeAndre Hopkins on a night he finished with eight receptions for 111 yards and two touchdowns. Will Fuller also looked good in his return from knee surgery which cost him the last nine games in 2018 and added two catches for 69 yards.

The running game, which was a question mark entering the year after a season-ending knee injury to Lamar Miller, was also effective in the opener. Duke Johnson and Carlos Hyde, who were both acquired late in the preseason, combined to rush for 140 yards.

Despite his success on Monday night, the Texans know Watson can't keep getting hit that much week after week as he did last year. As Tunsil gets more comfortable with the offense he should shore up the group and the unit should also get a boost when first-round draft pick Tytus Howard returns after missing Game 1 with a finger injury.

"We've got to cut down on that number there's no doubt about it," O'Brien said. "We can't give up six sacks."

Stills had three receptions for 37 yards and a score just more than a week after being traded from the Dolphins. O'Brien said they used him sparingly because of the limited practice time, but that his workload will increase as he learns more of the playbook.

"There will be more to come," O'Brien said.

Cornerback Aaron Colvin was the weakest link on a secondary which allowed 362 yards passing on Monday night. Colvin gave up two touchdowns in the second half. The first came on a 9-yard score by Taysom Hill in the third quarter before he got beat on a 14-yard TD reception by Tre'Quan Smith later in the period. Colvin was also on the coverage when Ted Ginn grabbed a 9-yard reception that set up the game-winning field goal.

The Texans didn't have any significant injuries against the Saints. Watson got banged up when he hit the ground hard on his lower back after his TD run, but O'Brien said the injury isn't anything that will keep him out this week.

Along with Howard, the Texans could also get receiver Keke Coutee back this week after he missed the opener after injuring his ankle in the first preseason game.

0 — For the first time in 105 games, three-time Defensive Player of the Year J.J. Watt did not record a tackle or quarterback hit on Monday.

The defensive end should expect to draw more attention from opponents this season with fellow pass rusher Jadeveon Clowney gone after a trade to Seattle. But O'Brien was quick to point out that too much shouldn't be made of the fact that Watt had zeroes across the stat sheet on Monday.

"J.J. Watt is a Hall of Fame player and he has usually shown up on the stat sheet," he said. "But he (impacts) the game in so many different ways, when he draws two and three blockers. They ran the ball away from him quite a bit. They did a good job, give them credit but I think he still impacted the game."

With more time and practice, Houston's new pieces on offense should be able to help the unit improve. The Texans believe Tunsil can be their franchise left tackle and he'll need to step his game up this week to keep Watson from being hit so much. Another week of practice for Stills, Johnson and Hyde should help them do more on Sunday against the Jaguars and give Watson more options to pile up big numbers.