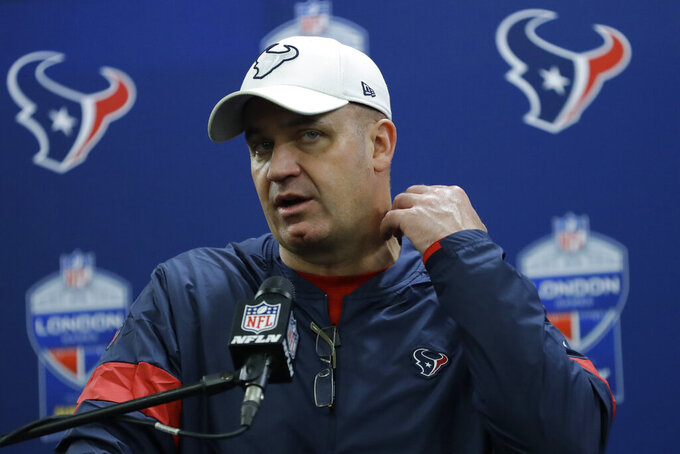 HOUSTON (AP) — Another week, another amazing play by Deshaun Watson.

Wrapped up by two defenders and about to be pulled to the ground, Watson saw Carlos Hyde behind him and pitched the ball to the running back to avoid a sack and keep a drive alive in Houston's 26-3 victory over Jacksonville in London on Sunday.

"I don't know if you get that many quarterbacks ... that can do that," receiver DeAndre Hopkins said. "But Deshaun's an amazing player. He's humble. He approaches every day with a great attitude."

That highlight came a week after Watson was kicked in the eye before escaping a defender and throwing a touchdown pass to help the Texans to a victory over Oakland.

Watson's play has helped the Texans win four of their last five games to improve to 6-3 and move into first place in the AFC South as they enter their off week.

After struggling with interceptions earlier this season, Watson has cleaned up his play and has thrown five touchdown passes with no interceptions in the last two games.

Watson is the first player in NFL history to have at least 17 touchdown passes (18) and five touchdown runs (5) through the first nine games of a season. He has 63 touchdown passes in his career. His 2,432 yards passing rank sixth in the NFL and his 18 TD passes are third most in the league.

While Watson and Houston's offense were the stars in London, the defense also was solid against Jacksonville. Houston didn't miss a beat in its first game without J.J. Watt, who is out for the season with an injury to his pectoral muscle. The unit had two interceptions, recovered two fumbles and sacked rookie Gardner Minshew four times. The Texans were also solid against the run, limiting Leonard Fournette to a season-low 40 yards rushing on a day they allowed their fewest points of the season.

Watson was sacked just once on Sunday but was hit seven times behind an offensive line that has struggled to be consistent this season. Houston got back rookie first-round pick Tytus Howard, who missed two games with a knee injury. But it was without left tackle Laremy Tunsil, who was inactive because of a shoulder injury. The Texans hope that he can get healthy during the week off and return to anchor the group as it tries to improve.

Carlos Hyde had a season-high 160 yards rushing against the Jaguars for his most yards since running for 193 yards in 2016. Hyde, who was traded to Houston in August, continues to play an important role in the offense while filling in for Lamar Miller, who suffered a season-ending knee injury in the preseason. Hyde ranks seventh in the NFL with 704 yards rushing.

WR Keke Coutee is healthy but did not play for the second straight week. Coutee appeared in six games with three starts this season and has 154 yards receiving. O'Brien hasn't provided a reason for not playing Coutee and instead going with Steven Mitchell and DeAndre Carter.

WR Will Fuller missed his second straight game with a hamstring injury and it's unclear when he'll return. ... S Tashaun Gipson (back/wrist) and cornerback Lonnie Johnson (concussion) didn't make the trip to London because of injuries.

25 — Houston hasn't allowed a 100-yard rusher in 25 consecutive regular-season games dating back to the opener of the 2018 season.

The Texans will use this week to get healthy before looking to build on their recent success when they travel to Baltimore on Nov. 17. After that, they'll return home for two prime-time tests against AFC South foe Indianapolis and the 8-1 New England Patriots.