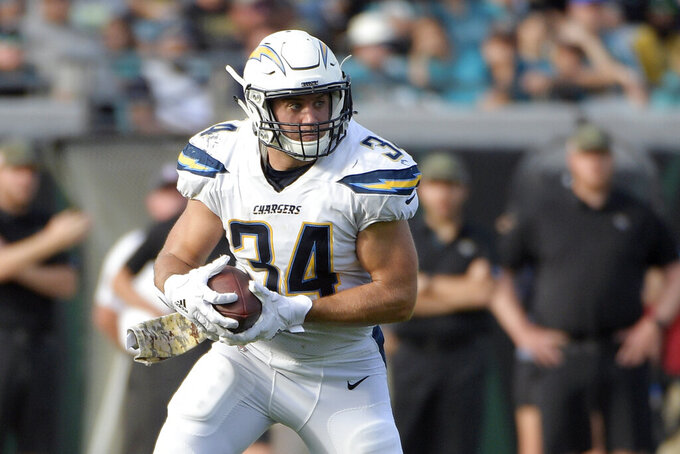 FILE - In this Nov. 12, 2017, file photo, Los Angeles Chargers fullback Derek Watt (34) runs after catching a pass during the second half of an NFL football game against the Jacksonville Jaguars in Jacksonville, Fla. Watt couldn't pass up the opportunity to play with his younger brother T.J. It's the main reason the fullback agreed to a three-year contract with the Pittsburgh Steelers. (AP Photo/Phelan M. Ebenhack, File)

PITTSBURGH (AP) — Turns out, Derek Watt's reunion with younger brother T.J. has its limits. Like say, sharing a roof for the first time since college.

It may be one of the few respites the two get from each other after Derek signed a three-year deal to join T.J. in Pittsburgh. While Derek admits the chance to share the same locker room with T.J. — something the two did in both high school and in college at Wisconsin — played a factor in his decision to head east after four years with the Chargers' organization, it wasn't the main reason the fullback chose the Steelers over a handful of other interested teams.

“The culture they have there, the tradition they’ve built, I just feel like it kind of fits into the way I was raised,” Watt said.

It helped that the Steelers — unlike many NFL teams — still find room on their roster for a fullback. Rosie Nix was a Pro Bowler in 2017 while opening holes for Le'Veon Bell and while Nix's role diminished in 2019 thanks in part to lingering injuries, Pittsburgh has long placed a premium on versatility. In addition to working out of the backfield, Watt was a standout on special teams with the Chargers and dabbled a little at tight end.

While Steelers coach Mike Tomlin declined to get into specifics with Watt on what role he expects to fill, Watt understands he needs to be willing to put his hand in whatever pile Tomlin points him to. It's part of the territory when you're 6-foot-2 and 235 pounds, making you the “littlest” brother in the Watt family.

Watt spent the majority of his time with the Chargers as a role player. He has 29 career touches for 201 yards and one touchdown — or one more than T.J., an outside linebacker and four fewer than oldest brother J.J., a five-time All-Pro defensive end for the Houston Texans.

Derek Watt admitted J.J. is jealous that he won't get to play alongside his brothers, though all three could share the field this season when Houston visits Heinz Field. Though Steelers' fans have inundated J.J. on social media pleading for him to find a way to make it to Pittsburgh, for now they'll have to settle having two-thirds of the NFL's first family.

“Bring the three of us, the trilogy all together, that would be something special,” Derek Watt said. “I’m not the big sexy signing that J.J. would probably be, but I plan to do whatever I can to not let those fans down.”

Watt joins an offense that will try to get back to a sense of normalcy in 2020. Pittsburgh somehow managed to squeak out an 8-8 record in 2019 despite losing quarterback Ben Roethlisberger for the season at halftime of Week 2.

Roethlisberger, who turned 38 earlier this month, is on track for a full recovery from right elbow surgery and Watt's arrival gives the team a little more flexibility offensively.

Chargers coach Anthony Lynn likened Watt to Dallas Clark, who began his NFL career as a hybrid fullback/tight end with Indianapolis before becoming one of Peyton Manning's favorite playmakers.

“That has been thrown around,” Watt said. “Dallas Clark was an incredible player, to be mentioned in same sentence is very humbling.”

It's something to shoot for, though Watt will almost certainly begin his time in Pittsburgh lining up behind Roethlisberger and potentially paving the way for running back James Conner. That's all he's focusing on following his brief courtship with the Steelers. Watt said his agents initially downplayed Pittsburgh's interest, perhaps out of fear he would make an emotional decision instead of the prudent one.

Turns out, he ended up doing both.

While he's eager to get to Pittsburgh, for now Watt is trying to keep his offseason routine as normal as possible, though the COVID-19 pandemic has forced a modest adjustment. The Watts typically get together with fellow former Wisconsin players this time of year. But the group of 8 to 9 turned out to be too large, so the Watts retreated to J.J.'s place, where they lift weights in a barn and go through conditioning drills in the grass.

In some ways, it's the same as it ever was.