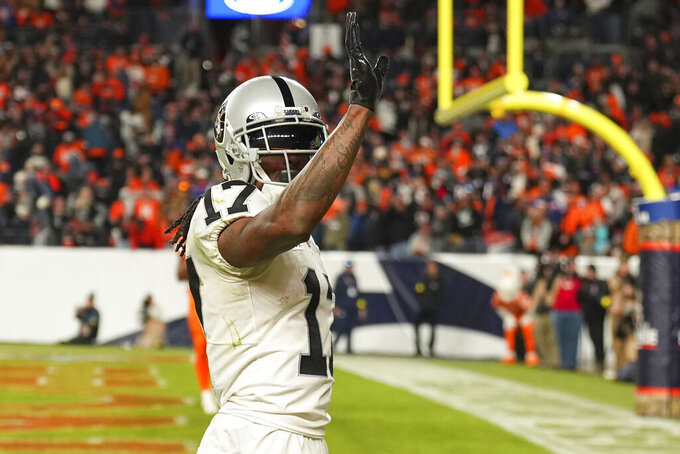 It was a rare week of happy returns in the NFL.

After only one kick or punt was returned for a touchdown in the first 10 weeks of the season, two were taken back in memorable fashion on Sunday.

Cordarrelle Patterson scored on a kickoff return for Atlanta and Marcus Jones did it on a punt for New England.

That marked the second time in the past three seasons that there was a kick and punt return touchdown on the same day. It also happened on Dec. 26, 2021.

Patterson's 103-yard return against Chicago was the record-breaking ninth kickoff return touchdown in his career. Patterson broke the mark he had shared with with Leon Washington and Josh Cribbs.

Seven of Patterson's return touchdowns have been at least 100 yards, while no one else has more than three.

While Patterson's return could be somewhat expected based on his history, Jones provided an improbable ending to the Patriots 10-3 win over the Jets.

Jones' 84-yard punt return with 5 seconds remaining marked the first time in at least 40 years when the first touchdown of a game came in the final minute on a defensive or special teams TD.

It was the sixth game-winning punt return TD in the final 2 minutes of regulation or overtime since the merger. The only one to come later in a game came in 2010 when DeSean Jackson had one on the final play for Philadelphia in a win over the New York Giants.

The Detroit Lions are coming into their annual Thanksgiving game on a roll for a change.

The Lions (4-6) won their third straight game on Sunday to give them three wins in a row headed into the holiday for the second time since the merger. The only other time that happened was in 2017 when their three-game winning streak was snapped with a 30-23 loss to Minnesota.

That started a run of five straight Thanksgiving losses that the Lions take into Thursday’s game against Buffalo (7-3). That’s tied for the second longest Thanksgiving losing streak for the Lions since they started playing on the holiday in 1934.

The Thanksgiving slate that also features the Giants (7-3) visiting Dallas (7-3) and Minnesota (8-2) hosting New England (6-4) is one of the best in recent memory. The combined .650 winning percentage for the six teams playing Thursday is the third best since the NFL went to three Thanksgiving games in 2006, trailing only the .700 from 2011 and .636 from 2014.

Patrick Mahomes once again proved to be the comeback king.

Mahomes helped the Chiefs rally from a 20-16 deficit after three quarters by throwing a pair of go-ahead touchdowns in the fourth for a 30-27 win over the Chargers.

The comeback was capped by a 17-yard TD pass to Travis Kelce with 31 seconds to play. The Chiefs improved to 9-6 (.600) with Mahomes at quarterback when trailing at the end of the third quarter.

The next best winning percentage in the Super Bowl era for a QB when trailing to start the fourth quarter with a minimum of 15 tries is Jay Schroeder at .357 (15-27).

The win improved Mahomes to 24-3 against AFC West rivals, including a perfect 14-0 on the road in is career. Mahomes' .889 winning percentage against his own division is the best of any QB since the merger with at least 25 division starts.

Derek Carr and Davante Adams have generated some overtime magic in their careers and now have done it as teammates.

Carr and Adams connected on a 35-yard TD pass on Sunday to beat Denver 22-16 in overtime and add to their impressive overtime resumes.

Carr is now tied for the second most TD passes in OT in NFL history with three, trailing Drew Bledsoe by one. But all of Carr's strikes have come from at least 30 yards out, the most of any quarterback.

The win also improved the Raiders record in overtime with Carr in the game to 8-1, with the only loss coming in Week 2 against Arizona this season.

Adams scored his third career overtime touchdown after doing it twice with Green Bay, tying Hall of Famer LaDainian Tomlinson for the most in NFL history.

Adams had 11.9 yards of separation on the game-winning catch, the most for any OT catch since NFL NextGen stats began tracking that in 2016.