Wilson says emotions won't get to him in return to Seattle 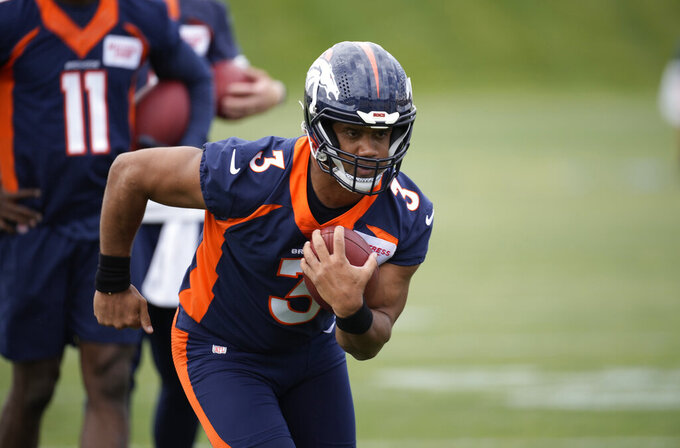 ENGLEWOOD, Colo. (AP) — Russell Wilson says he won't get caught up in the emotions of his return to Seattle when he leads the Denver Broncos onto Lumen Field to face the Seahawks in the season opener in four months.

“It's got to be non-emotional. You've got to go into it with the understanding that it's just ball,” Wilson said Monday after the Broncos’ first day of organized team activities.

In his first public comments since the NFL schedule was released earlier this month, Wilson said he aims to stay even-keeled in his return to Seattle, where he spent the first decade of his career and led the Seahawks to their only championship, a win over Denver in the Super Bowl following the 2014 season.

Wilson became the first quarterback traded to the team he beat in a Super Bowl when the Seahawks dealt him to Denver in March for a package of players and draft picks.

With the Broncos scheduled to visit the Seahawks this season, the NFL made Wilson's return to Seattle the centerpiece of its opening weekend, putting the teams in prime time on Sept. 12.

That marks the return of the Broncos to “Monday Night Football” after their streak was snapped last season at 29 years.

“I think it’s going to be an exciting time," Wilson said. “Obviously, Seattle’s meant the world to me over the past 10 years. It’s a special place, a special place to play. You know, I have a high regard for all those guys over there.”

Troy Aikman, who moved from Fox to ESPN this offseason, said in a recent teleconference that he was “thrilled with the schedule to see that as the opener.”

“When you start looking at what potential games there are going to be, that was one that I certainly circled and thought, ‘Man, that would be a great game if we were able to get it on Monday night,’” Aikman said. “And to have it right out of the box I think is awesome, and to be playing there in Seattle with Russell going back, obviously it’ll be very emotional for him. He’ll be fantastic.”

The NFL gave the Broncos five prime-time games in 2022 thanks to the addition of Wilson. Denver hasn't reached the playoffs since winning Super Bowl 50 in Peyton Manning's final start, and Wilson will be Denver's sixth different starting quarterback in the last six seasons.

“I’m glad we’re doing it early," Hackett said. "That was going to happen at some point in the season, so let’s attack it. Let’s all get into it and rally around the Broncos, and let’s get ready to go in there in a hostile environment and have a good game.”

Aikman said he envisions the scene in Seattle as one of appreciation, not hostility.

“You always wonder what the reception is going to be like. I can’t imagine it being anything other than just a great celebration for a great athlete and all that he meant to the 12s there in Seattle,” Aikman said of the Seahawks' famed fan base, known as the '12th Man.'

The Broncos have experience with emotional reunions. Manning's return to Indianapolis came in 2013, a year after he'd been released by the Colts and signed with the Broncos. He admittedly grew emotional during a tribute prior to kickoff and the Broncos lost 39-33.

Treating a big game as though it were any other isn't anything new to Wilson, who's notorious for his unflappable approach — although he's never had a homecoming like this one.

“I've always played with a neutral mindset," Wilson said. "I'm a positive person by nature and I believe in non-negativity.