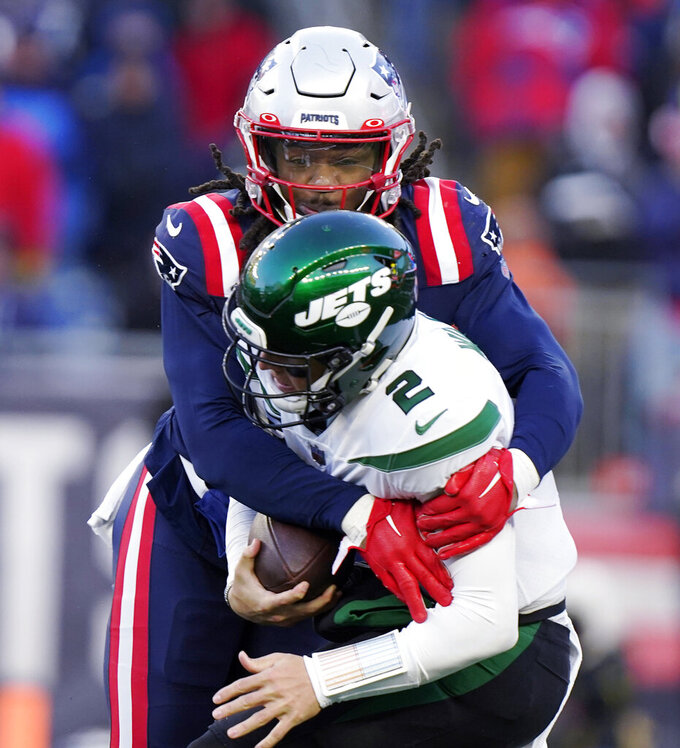 Well, that took a lousy turn in a hurry for the New York Jets.

From the possibility of sitting in first place in the AFC East to the bottom of the division standings — with some serious questions about the quarterback.

And Zach Wilson is taking plenty of hits for his lousy play and uninspired answers after the Jets' 10-3 stunning loss to the New England Patriots on Sunday. He's also uncertain to be under center next Sunday when New York hosts Chicago.

“We’re keeping everything on the table,” coach Robert Saleh said Monday when asked if he was committing to Wilson as the starter. ”We have to look at what’s best for this organization and team.”

Saleh added “it's not all about the quarterback.”

But Wilson, the No. 2 overall pick in last year's draft went 9 of 22 for a measly 77 yards with several wayward throws. The Jets managed just 2 total yards on seven possessions in the second half. That's despite New York's defense sacking Mac Jones six times and holding the Patriots to 4 of 15 on third down.

But when asked if he thought he and the Jets' offense are letting the defense down, Wilson was defiant.

It was a response that soon went viral as an example of a lack of accountability.

Meanwhile, inside the locker room, rookie wide receiver Garrett Wilson was railing against the “sorry” offense — a performance Saleh called “dog (crap)" after the game. The first-round pick out of Ohio State insisted — without naming names during his rant — that coaches “have to put more trust in the receiver room” and “hopefully, this is a wakeup for some people in the facility.”

If New York does sit Wilson — something Saleh said Sunday wasn't a thought — it would be either Mike White or Joe Flacco under center.

“Something’s got to get better,” Saleh said, "and we’re going to do our best to find an answer.”

The Jets are 6-4 and in the middle of the playoff hunt, but it feels a lot more dire.

That's because despite the surprisingly strong start, the issue of whether Wilson can be the franchise quarterback the Jets hoped has been percolating.

He's 5-2 as the starter after missing the first three games with a knee injury, with both losses coming against Bill Belichick's bunch. That's not unusual for a young quarterback. But it's the way Wilson has performed in those defeats that's alarming.

The Patriots intercepted him three times in the teams' first meeting three weeks ago. They absolutely stymied him this time around.

“It was a frustrating day, of course,” Wilson said. “I feel like I had some balls that got away from me. But we've got to find ways on offense. We've got to do some digging, watch the film, and see what we can do better.”

That might also apply to how he handled his postgame news conference. Wilson's confidence and moxie has been praised, but not taking ownership of his struggles in that instance — especially as the quarterback and team leader — rubbed some the wrong way.

The Jets' defense is a playoff-caliber unit. The offense has several playmakers, even with rookie running back Breece Hall out for the season.

But Wilson is the weak link.

And what he does moving forward will be the difference between the Jets snapping an 11-year playoff drought or extending that skid — and perhaps looking for a potential replacement for Wilson during the offseason.

The defense has been impressive the past several weeks, particularly the pass rush. The Jets are putting regular pressure on quarterbacks without coordinator Jeff Ulbrich even calling many blitzes. The Jets are tied for fourth in the NFL with 32 sacks entering Monday night.

Offensive coordinator Mike LaFleur seemed to find a winning game plan by focusing on the running game, but Hall's injury a few weeks ago put a crimp in that. Belichick took away the ground game as the Jets ran for just 59 yards on 23 attempts, an average of 2.9 yards. And when Wilson was forced to make plays — something Saleh and several players insisted they were confident he could do — he fell flat.

DE Bryce Huff. After being inactive the first three games, Huff has become a sparkplug in the Jets' pass rush in a situational role. Signed as an undrafted free agent out of Memphis in 2020, Huff already has a career-high 2 1/2 sacks, including one in each of the past two games. He also has six quarterback hits.

Wilson would seem to be the obvious answer, but his stock was already running low. Instead, coordinator Brant Boyer, punter Braden Mann (who had 10 punts) and the Jets' special teams unit take the spot this week — despite an otherwise solid day. Losing on an 84-yard punt return for a touchdown by Marcus Jones with 5 seconds left simply can't happen.

WR Corey Davis (knee) could return this week after missing three games. ... RG Nate Herbig (shin) was active Sunday, but wasn't feeling 100% before the game and sat out. ... DT Sheldon Rankins (elbow) is likely a few weeks from returning.

2 — How a team, especially one playing for first place in the division, can manage just 2 total yards in an entire half — the fewest by any team this season — is astounding.

The Jets have a chance to bounce back against a Bears team that has lost six of seven and has injury concerns about quarterback Justin Fields.

But first will come a decision on whether Wilson remains the quarterback for the Jets.