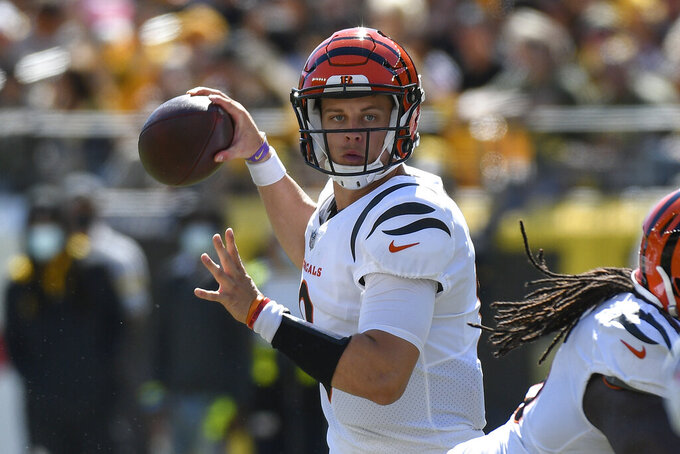 OPENING LINE: Bengals by 7 1/2, according to FanDuel SportsBook

TURNOVER DIFFERENTIAL: Jaguars minus-8; Bengals minus-1.

JAGUARS PLAYER TO WATCH: RB James Robinson is coming off his best game of the season, carrying 15 times for 88 yards and a touchdown. He averaged a season-best 5.9 yards per carry, with a long of 21. He also had 46 receiving yards.

BENGALS PLAYER TO WATCH: WR Ja'Marr Chase, after dropping passes throughout the preseason, has 11 catches on 16 targets with four touchdowns. He caught two of Joe Burrow's TD passes in the win over the Steelers, including a spectacular fingertip grab in the end zone.

KEY MATCHUP: Burrow vs. Jacksonville’s defense. Burrow has thrown for 640 yards and seven touchdowns but also has four interceptions. He threw three on consecutive pass attempts in the Week 2 loss to the Bears. The Jaguars have struggled to generate steady pressure and are allowing over 300 yards per game through the air, including 316 to the Cardinals' Kyler Murray last week.

SERIES NOTES: Cincinnati picked up its first of four overall wins last season in a Week 4 defeat of the Jags, who went on to finish 1-15. Before that, Jacksonville won head-to-head matchups in 2017 and 2019, but the Bengals have won six of the last eight.

STATS AND STUFF: Burrow and Jaguars QB Trevor Lawrence are two of the seven active NFL quarterbacks who were selected with the No. 1 overall pick in the draft. ... The Jaguars will face overall 2020 No. 1 pick Burrow four days after facing 2019 No. 1 overall pick Murray in a loss to the Cardinals. ... Jacksonville has lost 18 consecutive games, eight shy of tying the NFL record set by Tampa Bay. … The 0-3 start is the sixth in Jacksonville franchise history. ... Lawrence completed a season-high 64.7% (22 for 34) for 219 yards and a touchdown but threw two interceptions in the loss to Arizona. ... Jacksonville on Monday traded CB CJ Henderson to the Carolina Panthers for tight end Dan Arnold. ... The Bengals have scored on all five of their trips to the red zone (five TDs and a field goal). ... Jamal Agnew is the first player in NFL history to have 100-plus-yard returns in consecutive games. He returned a missed field goal 109 yards last week and returned a kickoff 102 yards the previous week.

FANTASY TIP: Bengals receivers Chase and Tyler Boyd could have big days against the Jacksonville secondary as Burrow hits his stride.