Winless Jets trying to stay positive after loss to Chargers 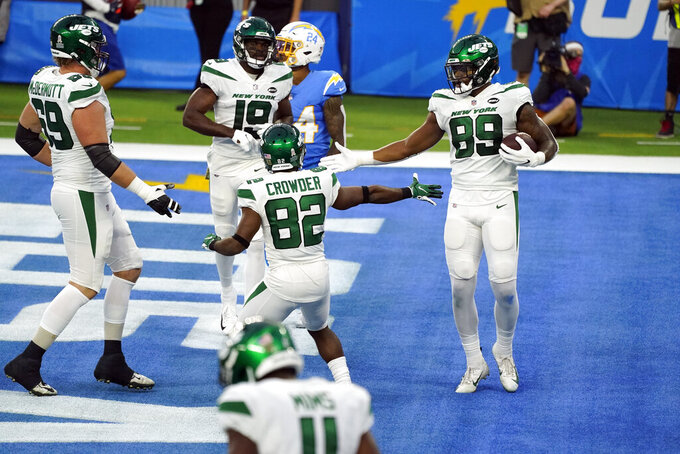 That might be the best thing they can take away from their latest loss, 34-28 to the Los Angeles Chargers on Sunday.

“We can obviously play with teams,” quarterback Joe Flacco said. “If confidence is lacking — and listen, it’s tough for it not to be — we have to definitely find ways to keep ourselves going. But I think you can definitely see that we should have no lack of confidence. We can definitely go out there and compete to win these football games. And we just need to have that mindset from the very first whistle.”

The Jets (0-10) are off to the worst start in franchise history, a dubious distinction which covers plenty of dismal ground. They also became the first team in the NFL this season to be eliminated from the playoff hunt.

New York continued to show flaws in falling behind by 18 points at halftime and again late in the third quarter, but Flacco views the one-possession losses to New England and the Chargers (3-7) in their past two games as a sign they aren’t going to give up on the rest of the season.

“I think we have a lot of things we can use to build off of over the last two weeks. But at some point, we’ve just got to make sure we make it happen,” Flacco said.

New York got off to a positive start, with Henry Anderson blocking a punt to set up La’Mical Perine’s touchdown run. Marcus Maye then forced a fumble by Keenan Allen at the goal line to snuff out the ensuing Chargers drive.

However, Flacco made a poor throw from his own end zone that Tevaughn Campbell easily stepped in front of and returned 5 yards for a pick-6, erasing whatever confidence the Jets had established in the opening 11 minutes.

“The interception I threw was really bad,” Flacco said. “I threw it way behind (Jamison) Crowder. I didn’t get my hips out there.”

It took a while for Flacco and the offense to recover. They had a season-low 82 yards in the first half. Flacco was just 3 of 8 passing for 30 yards, failing to complete a throw to a wide receiver.

After the Jets decided to let loose in the second half, Flacco finished 15 of 30 passing for 205 yards with touchdowns to Breshad Perriman and Chris Herndon.

But even as their offense got on track, the Jets still had few answers for Chargers rookie Justin Herbert. He shredded an inexperienced secondary for 366 yards and three touchdown passes, with savvy Keenan Allen making a team-record 16 catches for 145 yards and a score.

The struggling Chargers, who made plenty of self-inflicted mistakes of their own to let the Jets get back into the game, seemed like the best chance remaining to pick up a win. Now, the threat of a winless season is looking all the more likely.

Keeping a positive mindset will be crucial for the final six games, which includes four teams in the playoff chase and division foes Miami and New England.

The Jets have avoided giving in to frustration so far, and veterans like Flacco are trying to maintain a positive attitude for their younger peers.

“It’s obviously in the back of people's heads, but we’re fighting to battle every day to stay confident and keep our heads held high and come out here and play football games the way we know how to,” Flacco said. “So, we’ve just got to keep doing that, keep focusing on the day-to-day, and we’ve got to have faith that we have the guys to get it done.

"And one of these days, we’ll look up at the scoreboard and we’ll have a victory at the end of four quarters.”