Winston throws for 456 yards, 4 TDs as Bucs rally over Colts 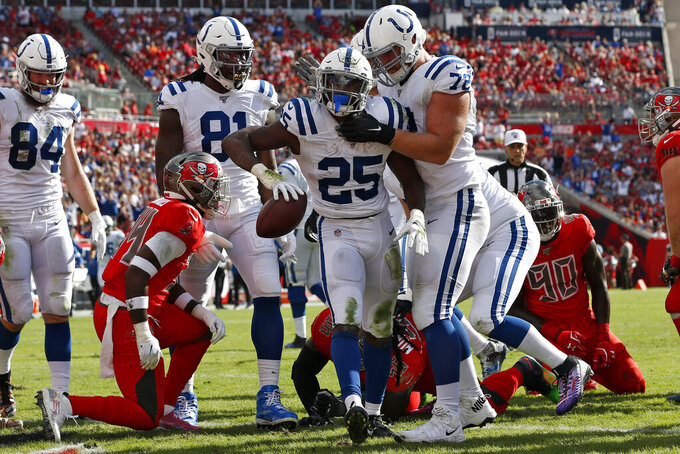 Indianapolis Colts running back Marlon Mack celebrates with offensive tackle Braden Smith (72) after his 2-yard touchdown run during the first half of an NFL football game against the Tampa Bay Buccaneers Sunday, Dec. 8, 2019, in Tampa, Fla. (AP Photo/Mark LoMoglio)

The suddenly red-hot Buccaneers (6-7) will miss the playoffs for the 12th straight year despite rallying Sunday to beat the Indianapolis Colts 38-35 for their third consecutive victory and fourth in five games.

Winston continued to state his case for keeping the starting quarterback job beyond 2019, overcoming another turnover-marred performance by throwing for 456 yards and four touchdowns including the-winner with 3:51 remaining.

And, he did it despite playing the second half with what coach Bruce Arians described as a “little bitty fracture" in his right thumb.

“He was fine at halftime. Then when he went to grip the ball, he couldn't grip it. So they X-rayed his thumb," Arians said, adding the injury was not serious. “He was able to get his strength back and come back in."

Arians has declined to commit to Winston as Tampa Bay's quarterback of the future, saying last week that he will wait until the end of the season to make a decision.

In the meantime, the Bucs want to finish as strong as possible.

“The resiliency of this team is growing on me," Arians said. “Three in a row. (Indianapolis) is a good team missing some guys. But we made a couple of receivers look like Reggie Wayne and Marvin Harrison. It wasn't our best, but we won. That's nice."

Winston overcame throwing three more interceptions and having one returned for a TD for the fifth time this season to wipe out a 14-point , second-half deficit. He completed 33 of 45 passes and the Bucs scored TDs all four times they drove inside the Colts 20.

“They got hot," Indianapolis coach Frank Reich said. “We knew they were an explosive team and can make plays.”

The Colts (6-7) have dropped five of six following a 5-2 start, falling from first place to third in the AFC South.

“Obviously we think we're a better team than that, but the reality is that's our record," Indianapolis quarterback Jacoby Brissett said. “We've got to do things to change that. Do the things necessary to make plays in those critical times of the game. I think we've got the right guys in the locker room to do it.”

Winston threw for TDs of 61 yards to Mike Evans, 3 yards to Cameron Brate and 17 yards to Justin Watson before putting the Bucs ahead for good with a 12-yarder to Breshad Perriman with just under four minutes left.

Brissett completed 19 of 36 passes for 251 yards, two TDs and no interceptions. He led a drive to midfield, where the Colts were stopped on downs, ending any hopes of a comeback win.

“A tough loss. ... It hurts,” Reich said. “We said in the locker room, we've been in a little bit of a rut not making the plays to finish games. This is a few games in a row now that we've had a lead in the second half and not able to sustain that."

Darius Leonard returned one of his two interceptions 80 yards for a second-quarter TD, and Marcus Johnson had a 46-yard scoring reception and finished with 105 yards on three catches for the Colts.

Chase McLaughlin, signed last week to fill in for injured kicker Adam Vinatieri, made field goals of 50 and 19 yards. But a 47-yarder that would have given the Colts a 38-31 lead hit the right upright and bounced away midway through the fourth quarter.

Winston began the day ranked second in the NFL in passing yardage, but has thrown a league-leading 23 interceptions and turned over the ball 28 times overall.

Leonard picked off the Tampa Bay quarterback’s first pass of the day, setting up Brissett’s long TD pass to Johnson. Dare Ogunbowale fumbled on the next Bucs possession, leading to McLaughlin’s 50-yard field for an early 10-0 Colts lead.

But if there’s one quality Winston has that even the most vocal of his critics appreciate is the quarterback’s resilience.

In addition to scoring on a 1-yard run, he hit the 6-foot-5, 231-pound Evans in stride on the receiver’s long TD reception to help the Bucs stay in the game despite the turnovers that aided the Colts to build a 27-21 halftime lead.

Winston threw for 277 yards in the first half alone. His third TD pass of the day, the 17-yarder to Justin Watson, trimmed a 14-point deficit to 35-28. Tampa Bay pulled within 35-31 on Matt Gay’s 44-yard field goal early in the fourth quarter.

“I can snap and clear. I don't focus on the last play," Winston said. “The key is I have to not be in those situations. That's what I have to continue to work at."

Colts: RB Marlon Mack returned to the lineup after missing two games with a broken hand. He rushed for 38 yards on 13 carries and scored on a 2-yard run in the second quarter. ... Vinatieri was inactive with a left knee injury.

Buccaneers: PR T.J. Logan broke his hand in practice on Friday. ... G Alex Cappa was inactive with an elbow injury. ... Evans left the game after injuring his right hamstring on the 61-yard TD play and did not return. ... Winston sat out the first series of the second half because of his thumb injury. Backup Ryan Griffin took a snap in a regular-season game for the first time in his six-year career.

Buccaneers: at Detroit on Sunday.