Winston's improved play has Bucs off to 2-2 start 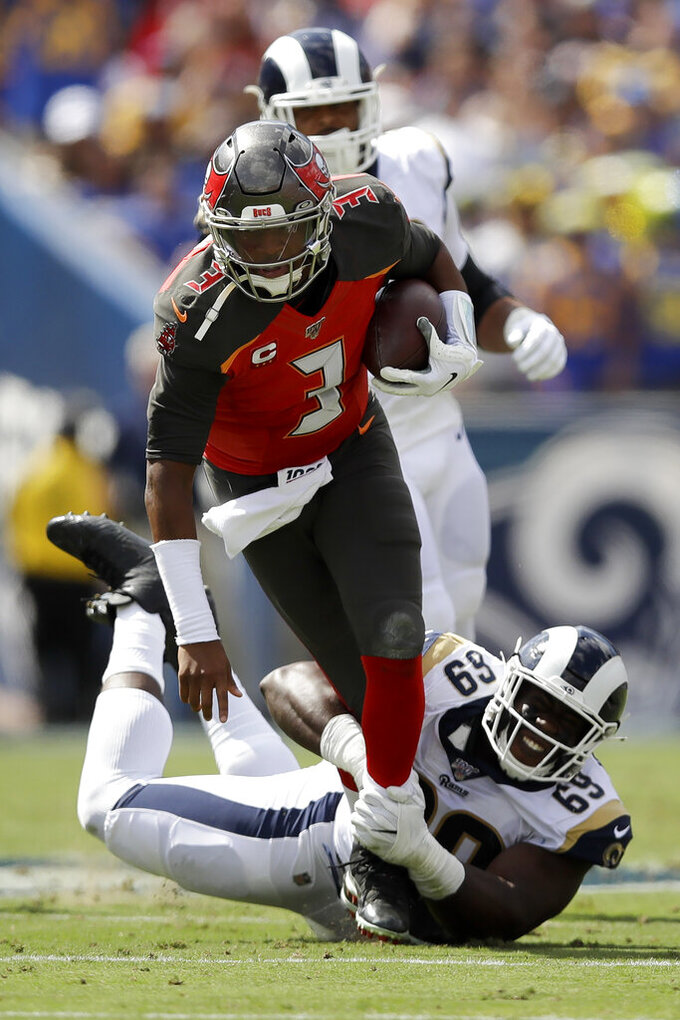 TAMPA, Fla. (AP) — The Tampa Bay Buccaneers are 2-2 with a pair of surprising road wins, thanks in part to Jameis Winston's ability to cut down on costly mistakes.

The fifth-year pro has played well since having a pair of interceptions returned for touchdowns in a season-opening loss at home, and the Bucs are even beginning to show signs of being able overcome some of the young quarterback's less-than-stellar moments.

Winston had another interception run back for a TD during Sunday's 55-40 victory over the defending NFC champion Los Angeles Rams, trimming what was once a 21-point lead to five in the fourth quarter.

But unlike against San Francisco in Week 1, the No. 1 overall pick from the 2015 draft held his composure and was able to close out the Rams with help from an improved defense that forced four turnovers, including a clinching fumble.

"I love the fact that we're finding ways to win again. We did it in Carolina, we should've done it against the Giants, but it's all part of that learning experience," coach Bruce Arians said Monday, noting the resiliency of a team that blew an 18-point second-half lead in a narrow loss to the New York Giants at home the previous week.

"I think the team that shows up Wednesday (for practice) is going to be a much more confident team, knowing that talent's not an issue," Arians added. "It's not talent. It's just whether we play well enough in critical moments."

Winston threw three interceptions in a 14-point loss to San Francisco in the opener. He had two turnovers over the next three games combined — beating Carolina and the Rams on the road while losing to the Giants, who rallied from a 28-10 halftime deficit to beat the Bucs 32-31.

Winston threw for 385 yards and four touchdowns against the Rams, finishing with a 120.5 passer rating. He's thrown three or more TD passes in consecutive games for the first time in his career.

"He's just growing in the offense," Arians said, adding that offensive coordinator Byron Leftwich and quarterbacks coach Clyde Christensen have done "a great job with him, fundamentally and mentally."

"I don't know if anybody's played better the last three weeks than he has, and the numbers should bear it — we put a lot of points up," Arians said. "You jump out 21-0, you get the crowd out of it and then you just keep playing. The one thing I kept preaching was, 'Keep scoring, keep going after it,' because I knew the Rams were going to score some points."

The running game continues to make Winston's job easier. Ronald Jones led the way against the Rams, gaining 70 yards on 19 attempts and scoring a touchdown. The second-year pro could have an even bigger day if two runs of 25-plus yards hadn't been called back because of penalties.

The Bucs haven't gotten much production out of the kick and punt return teams. T.J. Logan's poor decision to return a kick out of the end zone forced Winston to begin one second-half drive in poor field position. The Rams capitalized when the quarterback's only interception was returned for a TD that trimmed Tampa Bay's lead to 45-40.

All 12 of Godwin's receptions were for first downs or touchdowns.

"That's a pretty good stat," Arians said, noting Godwin is also an excellent blocker, who has helped the emergence of the running game.

It's a rare week when no one's answering questions about crucial mistakes or breakdowns.

Reserve LB Jack Cichy left Sunday's game with an elbow injury that could sideline him two to four weeks.

9 — Shaquil Barrett sealed Sunday's victory with his ninth sack, forcing a fumble that Ndamukong Suh returned for a touchdown that put the game out of reach. The outside linebacker ties Mark Gastineau (1984), Kevin Greene (1998) and Kabeer Gbaja-Biamila (2001) for the most sacks in NFL history through four games.

A six-week stretch that will see the Bucs fly nearly 21,000 miles before they have another true home game continues Sunday at New Orleans. The following week they'll travel to London for a "home" game against Carolina.