Without D-Hop, Arizona's offense must adjust in stretch run 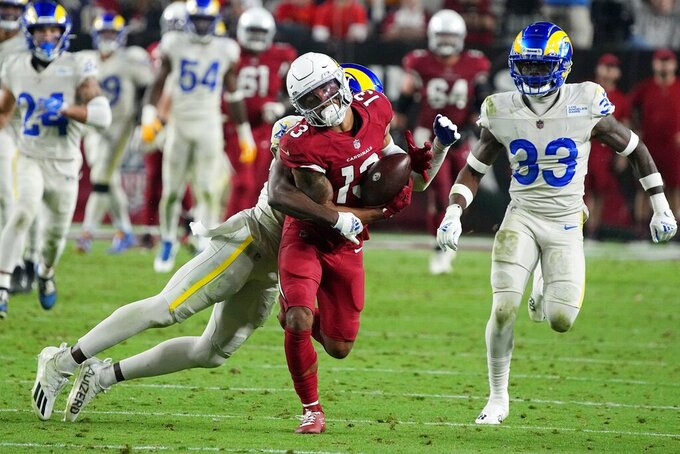 TEMPE, Ariz. (AP) — A.J. Green signed with Arizona during the offseason partly because he was OK with being a No. 2 receiver.

Now the Cardinals hope that — at least for the next month — the veteran is OK with being something closer to a No. 1.

The Arizona Cardinals (10-3) will try to clinch a spot in the postseason for the first time in six years without their best receiver when they travel to face the Detroit Lions (1-11-1) on Sunday. Three-time All-Pro receiver DeAndre Hopkins is likely out for the rest of the regular season with a knee injury he suffered late in the team's loss to the Rams on Monday night.

“Obviously, that’s a big hit," Cardinals quarterback Kyler Murray said. “That’s a guy we all love and trust out there on the field.”

The good news for the Cardinals is that receiver is one of the team's deepest positions. Green is a seven-time Pro Bowl selection who has caught 42 passes for 654 yards and three touchdowns this season. Christian Kirk is having his best year with a team-high 53 catches for 718 yards and four touchdowns.

Arizona also added three-time Pro Bowl tight end Zach Ertz in a midseason trade and rookie Rondale Moore has had lots of good moments. Running backs James Conner and Chase Edmonds are both adept at catching passes out of the backfield.

But make no mistake: There's nobody quite like Hopkins.

“What D-Hop brings to the table, everybody knows what he means to this team," Green said. "So we're not going to replace him. You can't replace him. But we've got a great group of guys in the receiver room that we'll rally behind. It's not putting pressure on anyone else, we're just going to play our game, and make plays when our number is called.”

The Cardinals have good reason to be confident that they'll be productive without D-Hop. Murray and Hopkins both missed three games earlier this season and Arizona still had a 2-1 record in their absence.

The 33-year-old Green has looked rejuvenated since joining the Cardinals and caught a season-high seven passes for 102 yards against the Rams. Kirk is in a contract year and playing like a man who wants to get paid. They're both in position to see more targets — and more attention from opposing defenses — now that Hopkins is on the sidelines.

“I'd be lying if I didn't say the sense of urgency in our room didn't increase,” Kirk said. “When you lose a guy like DeAndre, the impact he has not only on our room, but on this team during the game, you have to fill that void. Guys have to step up and make plays.”

Cardinals coach Kliff Kingsbury acknowledged Murray hasn't been quite as effective in the moments Hopkins hasn't been on the field. But he also expects his offense to adjust. The Cardinals are averaging 28.2 points per game, which ranks fourth in the NFL.

“I think that's a small sample size, so I guess we'll find out this next month with how we play," Kingsbury said. "It's hard to replace a player like DeAndre, no doubt. Defenses play you differently. He's one of the best players in the league.

“It doesn't make it easier when he's not out there.”

NOTES: Starting center Rodney Hudson has been put on the reserve/COVID-19 list and won't play Sunday. Kingsbury said he expects Max Garcia will start in his place.