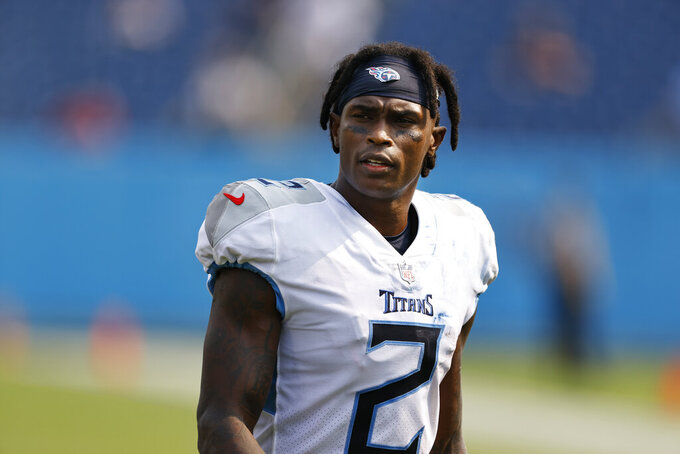 NASHVILLE, Tenn. (AP) — Robert Woods heard from Rams coach Sean McVay shortly after the reigning Super Bowl champs agreed to a deal with Allen Robinson. Given a chance to pick a new team, the receiver nicknamed “Bobby Trees” saw the Tennessee Titans as the best fit in more than one way.

“Winning the Super Bowl and not being able to play and then joining the organization that's right there, could've been there last (season), my goal is to win it back to back,” Woods said Wednesday.

The Titans announced the trade Wednesday, acquiring Woods for a sixth-round pick in the 2023 draft. The deal became final once Tennessee cleared some much-needed space under the salary cap. They also announced they signed back linebacker Dylan Cole to a one-year deal.

“We wouldn’t have had the success we’ve had since ’17 without Rob,” Snead said. “There are variables involved when you move on from a pillar player like Rob. Cap situation is one, diversity of skill set being another.”

The receiver also liked what he saw from the Titans' roster, including 2020 AP NFL Offensive Player of the Year Derrick Henry, quarterback Ryan Tannehill and wide receiver A.J. Brown, a Pro Bowler in 2020. Woods is known as a strong blocker in the run game, and the Titans ranked fifth in rushing offense.

Woods is recovering from a torn left ACL suffered in practice, the first significant injury of his career. The 6-foot, 195-pound receiver says he had a clean tear on Nov. 12 in practice. Asked about a timetable for his return, Woods said he was told not to share that.

“Right on track, getting strong and getting my strength,” Woods said. "And when the team is ready for me to be out there, I’ll be ready to go.”

After spending four seasons in Buffalo, Woods became a two-time captain with the Rams. He was one of four key figures acquired by the Rams in a four-month period in early 2017 that become cornerstones of the team's five straight winning seasons.

He also ran for 485 yards, and his five rushing touchdowns tied Curtis Samuel for second behind Deebo Samuel (11). Woods joined only Emmanuel Sanders and DeAndre Hopkins with at least 40 catches and 500 yards receiving in each of the last nine seasons. He has played 14 100-yard games.

This is the Titans' second move addressing the offense after signing a two-time Pro Bowl tight end in Austin Hooper. Tennessee has guaranteed an estimated $71 million in contracts in free agency in this league year and had an estimated $5.2 million in salary cap space Wednesday, according to OverTheCap.com.