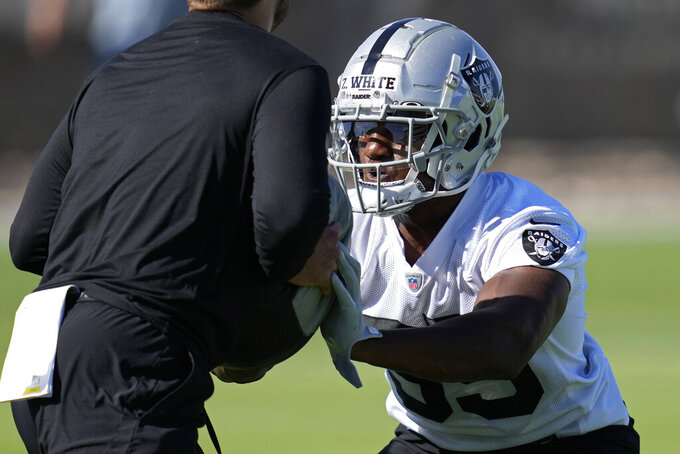 HENDERSON, Nev. (AP) — Scotland High School coach Richard Bailey has watched a handful of players make it to the NFL out of Laurinburg, North Carolina, with none more special than Las Vegas Raiders rookie Zamir White.

Shortly after the Raiders took White with the 122nd pick in the NFL draft, he said it was a moment he’d been waiting for his entire life.

Affectionately known as Zeus, the now-chiseled 225-pound power back weighed 1 pound when his mother was six months pregnant. Doctors wanted to terminate the pregnancy. His great-grandmother demanded otherwise, even if it meant he could exhale only once.

White was born with a cleft lip and cleft palate and was given two weeks to live. He spent the first three months of his life in a hospital, as he developed a leak in his kidney and needed surgery for a hernia.

Later in life, White tore his right ACL as a senior in high school and then his left ACL after arriving at the University of Georgia — both within a year.

White’s story was chronicled by the SEC Network and ESPN.

“The amount of resiliency he’s shown in his life, and I think overcoming what he did as a young boy, and then having a cleft lip issue, and being real shy and little introverted, and being picked on a little bit when he was younger — I think that really has just hardened him,” Bailey told The Associated Press during a phone interview. “I also think he feels like God kind of saved him, and he wants to make the most of this opportunity.”

White has been impressive during training camp. He opened the preseason with 52 yards on 11 carries and 23 yards from three receptions in a 27-11 win over the Jacksonville Jaguars in the Hall of Fame Game.

“He is very special, and I think it’s unbelievable what he’s gone through in his life, what his family’s gone through in their life, and to see the adversity that he has continually overcome — he just keeps doing it,” quarterback Derek Carr said. “And then to see him get out there in the first preseason game and run with that violence and run with that passion the way that he did, it was unbelievable.”

They’re attributes Bailey saw before anyone else. Like at White’s first practice as a freshman with the Fighting Scots, where he’d sprint 40 yards after the whistle, not the usual extra 10.

“It was every rep,” Bailey said. “It used to make me mad a little bit because I’d have to wait for him to get back. But he was going to do every rep like it was a game, and with that kind of effort.

“I always said to myself if anybody’s gonna make it — Zamir had great talent, God-given ability.”

Speaking to the media in person Monday for the first time, White displayed wholesome giddiness.

As he fought through his speech impediment with politeness, he excitedly addressed reporters with “sir” and “ma’am” while donning a bright smile as he discussed his journey.

He credited his freshman season under Bailey for developing his running style, adding it was then that he earned his nickname Zeus by “running real fast and being powerful.”

Veterans Josh Jacobs, Brittain Brown and Ameer Abdullah have taken him under their wing, sharing knowledge “every day with stuff,” he said, even though they’re all in competition for a final spot on the opening day roster.

“We don’t really care too much about the competition,” White said. “We just go out there and have fun."

A team-first mindset comes as no surprise, as Bailey said his star pupil carried that philosophy through high school and into college, right up until he won the national championship with the Bulldogs.

“He literally didn’t care if he carried the ball 12 times or 40 times as long as we won,” Bailey said. “And he was always the one who would cheer his teammates on. If he wasn’t in the game, he was the first one to celebrate his teammates' successes. The same way at Georgia when I questioned how much they were running him there. He’s like, ‘coach (Kirby) Smart calls plays, I just do what he tells me to do.’”

It’s the humble part of a passionate football player who was never supposed to be on the field in the first place.